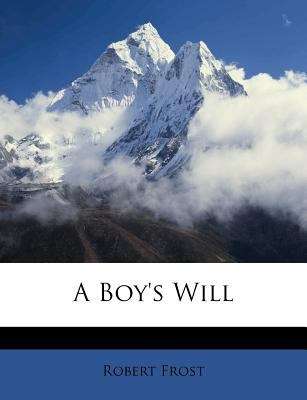 A Boy's Will is a poetry collection by Robert Frost. It is Frost's first commercially published book of poems.

Frost admitted that much of the book was autobiographical. As the proof sheets were printed in January 1913, he wrote the poems were "pretty near being the story of five years" of his life.[1] Specifically, Frost noted that the first poem of the book, "Into My Own", expressed how he turned away from people and "Tuft of Flowers" showed how he "came back to them".[1] In fact, some of the poems were written as early as two decades earlier.[2] Frost was apparently pleased with the book and wrote to a friend shortly after its publication, "I expect to do something to the present state of literature in America."[3]

Like much of Frost's work, the poems in A Boy's Will thematically associate with rural life, nature, philosophy, and individuality, while also alluding to earlier poets including Emily Dickinson, Thomas Hardy, William Shakespeare, and William Wordsworth.[1] Despite the first section of poems having a theme of retreating from society, then, Frost does not retreat from his literary precursors and, instead, tries to find his place among them.[4] The title of the book comes from the repeated lines in the poem "My Lost Youth" by Henry Wadsworth Longfellow: "A boy's will is the wind's will / And the thoughts of youth are long, long thoughts".[5] The line is, in turn, a quote from Olaus Sirma in Lapponia (1675).[6] Frost likely chose the title as a reflection of his own wayward early life.[2]