You Are Not Your Brain 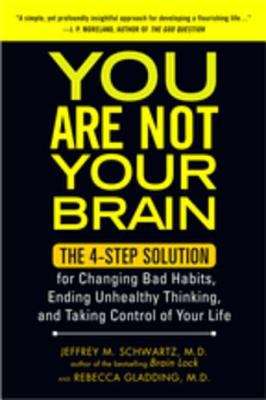 Two neuroscience experts explain how their 4-Step Method can help break destructive thoughts and actions and change bad habits for good. A leading neuroplasticity researcher and the coauthor of the groundbreaking books Brain Lock and The Mind and the Brain, Jeffrey M. Schwartz has spent his career studying the structure and neuronal firing patterns of the human brain. He pioneered the first mindfulness-based treatment program for people suffering from OCD, teaching patients how to achieve long-term relief from their compulsions. For the past six years, Schwartz has worked with psychiatrist Rebecca Gladding to refine a program that successfully explains how the brain works and why we often feel besieged by bad brain wiring. Just like with the compulsions of OCD patients, they discovered that bad habits, social anxieties, self-deprecating thoughts, and compulsive overindulgence are all rooted in overactive brain circuits. The key to making life changes that you want-to make your brain work for you-is to consciously choose to "starve" these circuits of focused attention, thereby decreasing their influence and strength. As evidenced by the huge success of Schwartz's previous books, as well as Daniel Amen's Change Your Brain, Change Your Life, and Norman Doidge's The Brain That Changes Itself, there is a large audience interested in harnessing the brain's untapped potential, yearning for a step-by-step, scientifically grounded and clinically proven approach. In fact, readers of Brain Lock wrote to the authors in record numbers asking for such a book. In You Are Not Your Brain, Schwartz and Gladding carefully outline their program, showing readers how to identify negative brain impulses, channel them through the power of focused attention, and ultimately lead more fulfilling and empowered lives.