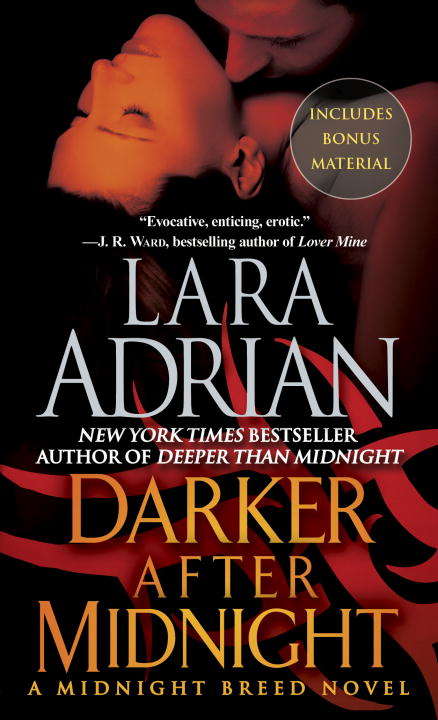 The climactic novel in Lara Adrian's New York Times bestselling Midnight Breed series--and her hardcover debut--Darker After Midnight invites readers to enter a thrillingly sensual world where danger meets desire. In the dark of night, a blood war escalates within the hidden world of the Breed. After existing in secret for many long centuries, maintaining a fragile peace with the humans who walk beside them unaware, a single act of retaliation has put the entire vampire nation at risk of discovery. It falls to the Order--a cadre of Breed warriors pledged to protect their own and humankind alike--to stop Dragos, the power-mad vampire at the center of the conflict, before his push for domination can explode into catastrophe.At the center of the Order's quest is Sterling Chase, once a morally rigid enforcer of Breed law, now a warrior fallen from grace, whose biggest battle is the one he wages against his own savage nature. With addiction beckoning him toward eternal darkness, Chase's path to redemption has never seemed more out of reach. But when his eyes meet those of Tavia Fairchild, a beautiful witness who identifies him at the scene of a mission gone terribly wrong, Chase finds himself drawn to the woman--and convinced she is something much more than she seems.Pulled into a vortex of intrigue and danger she can neither resist nor understand, Tavia is uncertain whom to trust. And while everything sane and logical warns her against getting close to Chase, she cannot deny that the handsome, deeply haunted male stirs something primal and ravenous within her. But even as she surrenders to her cravings, nothing can prepare her for the shattering truth of who--and what--she truly is.As the Order's enemy mobilizes for the battle of the ages, Dragos and his Minions unleashing a hell on Earth like nothing ever seen before, Chase and Tavia are thrust into the heart of the violence. With time running out and the streets running red with the blood of innocent lives, both Breed and human, together Chase and Tavia must find a way to defeat Dragos once and for all--or die trying.From the Hardcover edition.