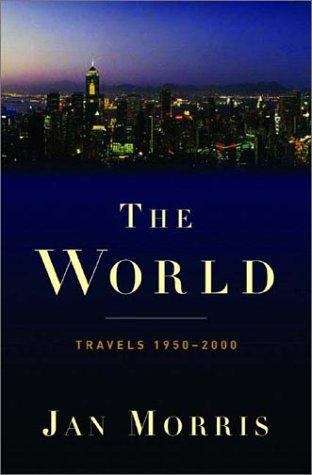 "The career of Jan Morris began auspiciously enough fifty years ago "with an imperial exploit" that burst like a salvo into newspapers throughout the world. Assigned by The Times of London to cover the first successful ascent of Mount Everest, "the supreme mountain of the world," Morris was the only reporter allowed on Sir John Hunt's expedition. Morris's great "scoop," published in London on June 2, 1953, the very morning of the coronation of Queen Elizabeth II, not only marked the beginning of a "new Elizabethan age," but also established the twenty-six-year-old as the foremost travel essayist of the age." "Fifty years later, we now have The World, which provides us with as complete an overview of Morris's work as we will ever see. Dividing the volume into five decades, Morris presents history with an unparalleled dramatic flair, creating a riveting portrait of the twentieth century, from the political idealism of the postwar years to its more recent tensions and excesses. With characteristic nuance and keen perspective, Morris makes vast cities seem almost three-dimensional - re-creating moods and smells, describing people and history with an immediacy that makes you feel you are there. From Manhattan to Sydney, Hong Kong to Trieste, Morris reports on a world capable of producing limitless hope and soul-darkening despair - from the promise of Sputnik to the ravages of AIDS, and all manner of things in-between." "In the range of essays, we are allowed to look in on her life as well, the slow but inexorable progression from youth to old age, as we experience the personal and historical changes wrought by the passage of time. The cumulative effect becomes, at once, a deep insight into the fragile skein that connects our globe and into the sensibility of one of its greatest chroniclers.