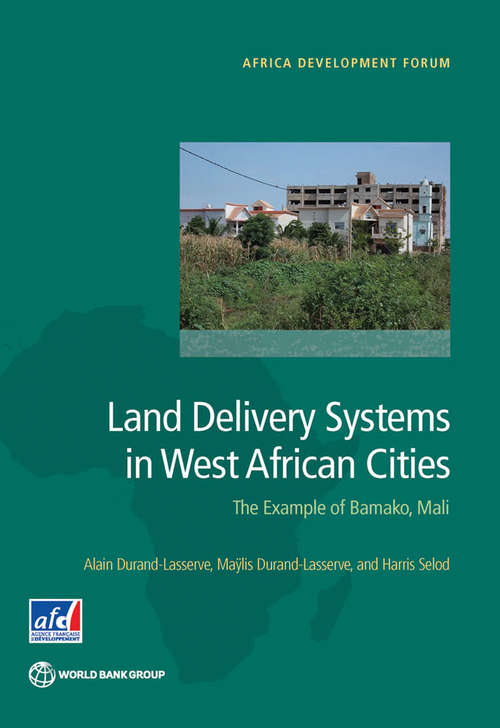 Urban and peri-urban land markets in rapidly expanding West African cities operate within and across different coexisting tenure regimes and involve complex procedures to obtain or make land available for housing. Because a structured framework lacks for the analysis of such systems, this book proposes a systemic approach and applies it to Bamako and its surrounding areas. The framework revolves around the description of land delivery channels: starting from the status of tenure when the land is first placed in circulation for residential use, it identifies the processes whereby tenure can be improved, the types of transactions that take place along the way, and interactions between land delivery channels.

The analysis of the system shows that land is initially provided through a customary land delivery channel--which predominates in peri-urban areas where land is being transformed from agricultural to residential use--and through a public and para-public channel, which involves the administrative allocation of residential plots to inhabitants and the transfer of land to developers. These two channels feed into the formal private channel which delivers serviced plots with ownership title at much higher prices. Plots in the various channels may be traded successively, with a degree of informality varying according to tenure, legality and registration of transactions. Whereas the development of the formal market is hindered by structural factors, the informal land market provides little tenure security. Targeted towards low and middle-incomes, it also attracts wealthy and well-connected buyers who have access to information and administrative and political power and can more easily formalize tenure. The sustained increase in land prices, numerous conflicts over land, high transaction costs and time-consuming formalization procedures, together with the involvement of a large number of stakeholders, combine to reduce affordability significantly and make access to secure land very difficult for the urban poor.

Hakimiliki:
2015 International Bank for Reconstruction and Development / The World Bank