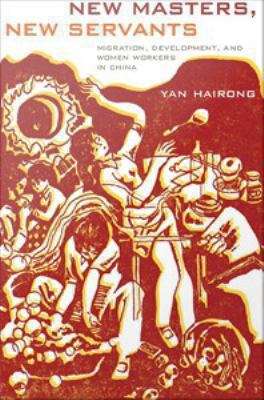 On March 9, 1996, tens of thousands of readers of a daily newspaper in China's Anhui province saw a photograph of two young women at a local long-distance bus station. Dressed in fashionable new winter coats and carrying luggage printed with Latin letters, the women were returning home from their jobs in one of China's large cities. As the photo caption indicated, the image represented the "transformation of migrant women"; the women's "transformation" was signaled by their status as consumers. New Masters, New Servants is an ethnography of class dynamics and the subject formation of migrant domestic workers. Based on her interviews with young women who migrated from China's Anhui province to the city of Beijing to engage in domestic service for middle-class families, as well as interviews with employers, job placement agencies, and government officials, Yan Hairong explores what these migrant workers mean to the families that hire them, to urban economies, to rural provinces such as Anhui, and to the Chinese state. Above all, Yan focuses on the domestic workers' self-conceptions, desires, and struggles. Yan analyzes how the migrant women workers are subjected to, make sense of, and reflect on a range of state and neoliberal discourses about development, modernity, consumption, self-worth, quality, and individual and collective longing and struggle. She offers keen insight into the workers' desire and efforts to achieve suzhi (quality) through self-improvement, the way workers are treated by their employers, and representations of migrant domestic workers on television and the Internet and in newspapers and magazines. In so doing, Yan demonstrates that contestations over the meanings of migrant workers raise broad questions about the nature of wage labor, market economy, sociality, and postsocialism in contemporary China.