The Logic of American Politics 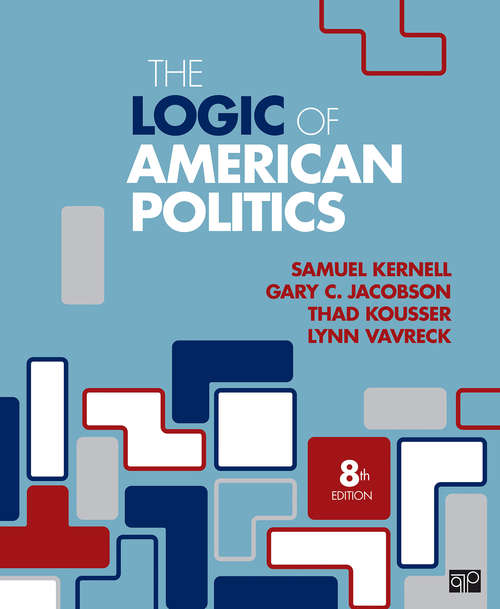 This new edition of the bestselling The Logic of American Politics is thoroughly updated and covers the dramatic 2016 election results with a thorough analysis of those results. It arms students with a revised introduction to institutional design that makes concepts such as command, veto, agenda control, voting rules, and delegation easier for students to master and apply, so they clearly see how the American political system was devised and why it works the way it does. Authors Samuel Kernell, Gary C. Jacobson, Thad Kousser, and Lynn Vavreck build students' critical thinking through a simple yet powerful idea: politics is about solving collective action problems.

This new edition continues to delve into partisan differences among voters and in government and highlight the increasingly partisan nature of campaigns. By exploring issues such as the Affordable Care Act’s troubled implementation, the increasing legalization of marijuana and same-sex marriage in the states, and the debate over immigration, the book illustrates how the institutional structures of government, federalism, and even campaigns can help voters make sense of their choices. The concluding chapter on policymaking examines the noticeable logic that guides American policy, as shown through issues like health care reform, global climate change, and the federal budget. Students glean insights into the sources of policy problems, identify possible solutions, and realize why agreement on those solutions is often so hard to achieve.