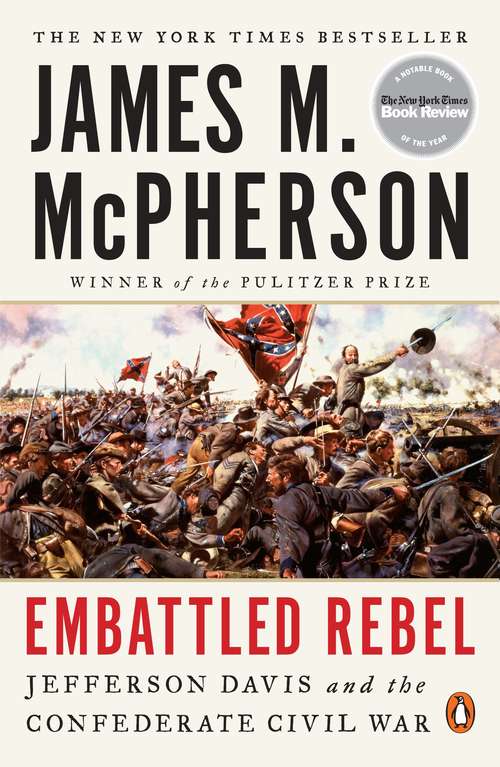 From the Pulitzer Prize–winning author of Battle Cry of Freedom, a powerful new reckoning with Jefferson Davis as military commander of the Confederacy

History has not been kind to Jefferson Davis. His cause went down in disastrous defeat and left the South impoverished for generations. If that cause had succeeded, it would have torn the United States in two and preserved the institution of slavery. Many Americans in Davis’s own time and in later generations considered him an incompetent leader, if not a traitor. Not so, argues James M. McPherson. In Embattled Rebel, McPherson shows us that Davis might have been on the wrong side of history, but it is too easy to diminish him because of his cause’s failure. In order to understand the Civil War and its outcome, it is essential to give Davis his due as a military leader and as the president of an aspiring Confederate nation.

Davis did not make it easy on himself. His subordinates and enemies alike considered him difficult, egotistical, and cold. He was gravely ill throughout much of the war, often working from home and even from his sickbed. Nonetheless, McPherson argues, Davis shaped and articulated the principal policy of the Confederacy with clarity and force: the quest for independent nationhood. Although he had not been a fire-breathing secessionist, once he committed himself to a Confederate nation he never deviated from this goal. In a sense, Davis was the last Confederate left standing in 1865.

As president of the Confederacy, Davis devoted most of his waking hours to military strategy and operations, along with Commander Robert E. Lee, and delegated the economic and diplomatic functions of strategy to his subordinates. Davis was present on several battlefields with Lee and even took part in some tactical planning; indeed, their close relationship stands as one of the great military-civilian partnerships in history.

Most critical appraisals of Davis emphasize his choices in and management of generals rather than his strategies, but no other chief executive in American history exercised such tenacious hands-on influence in the shaping of military strategy. And while he was imprisoned for two years after the Confederacy’s surrender awaiting a trial for treason that never came, and lived for another twenty-four years, he never once recanted the cause for which he had fought and lost. McPherson gives us Jefferson Davis as the commander in chief he really was, showing persuasively that while Davis did not win the war for the South, he was scarcely responsible for losing it.