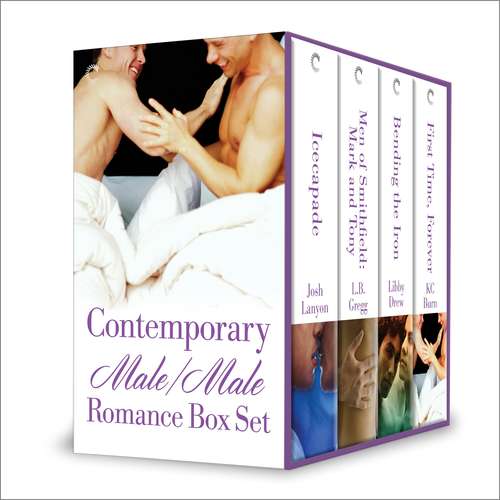 Ten years ago, diamond thief Noel Snow seduced FBI special agent Robert Cuffe, then fled into the dawn. Now a successful novelist, Noel has never forgotten the handsome lawman. But when Robert shows up at Noel's farm, elation quickly turns to alarm—he accuses Noel of masterminding recent heists. An innocent Noel can't resist planning a second seduction…but wonders if he can stay out of jail long enough to see it through.

Men of Smithfield: Mark and Tony by L.B. Gregg:

Coming home from work to find my boyfriend banging our landlord was bad enough. Discovering he had also cleaned out my bank accounts made it officially the worst day of my life. I think I can be forgiven for wanting revenge. Fortunately, the law is on my side in the form of sexy trooper Tony Gervase. He's always said he isn't interested in me in that way, but the hot encounter in his kitchen just now tells me he's changed his mind…

Bending the Iron by Libby Drew:

Michael feels trapped by having to keep his sexuality hidden, by his dead-end job, by family obligations. But everything changes when he meets Eric, a passionate museum curator. When Michael's curiosity gives way to intense attraction, Eric happily feels the same. But the truth is, Eric knows exactly what it is to be stuck in a bad situation, and his personal demons may ultimately hurt his connection with Michael.

Derrick and Trevor used to have an incredibly passionate relationship. Now that their son is off to college, they're working to put vanilla sex behind them—until Trevor begins to notice their age difference. When he chooses to keep his health issues and gray hairs down there to himself, Derrick assumes Trevor is having an affair. Though nothing could be further from the truth, how can Trevor prove he's desperate to reconnect with Derrick?