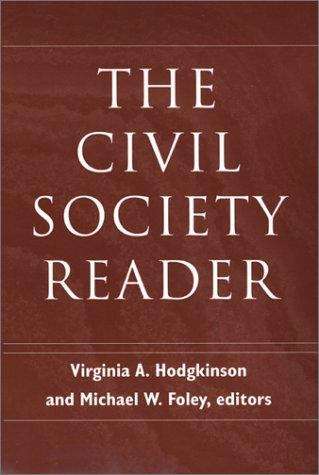 By: Virginia A. Hodgkinson • Michael W. Foley
Login
Sign Up

Virginia Hodgkinson and Michael Foley have assembled a definitive collection of 24 readings from the writings of thinkers who have shaped the civil society tradition in Western political thought through the ages. Their clear, intelligent introduction establishes a framework for understanding the complex and perennial debate over conditions of citizenship and the character of the good society. The text moves from the origins of the debate, a consideration of Aristotle's vision of political order, the polis, through the "civic republicanism" of Machiavelli and his English and American followers. It also discusses Hobbes's and Montesquieu's conceptions of natural law and the social contract, Immanuel Kant and Adam Ferguson and the emergence of the modern notion of civil society in the late 18th century, and the thoughts and theories of Hegel, Marx, and Gramsci.

Contemporary discussion of civil society in the US started with Berger, Newhaus, and others who addressed the role of intermediary institutions and the political process. In the 1980s, especially as the Cold War ended, writing on civil society exploded. The anthology tracks the key works that have influenced public dialogue in this era. Chapters by Walzer, Barber, Putnam, Almond and Verba, Shils, and others describe the role of association in civil society and its role in democratic governance. As the concept of "civil society" grows ever more prominent in academic and public considerations of politics and political organization, citizen participation, political alienation, voluntary organizations, privatization, government deregulation, and "faith-based" charities, Civil Society: A Reader is the essential historical and theoretical text.