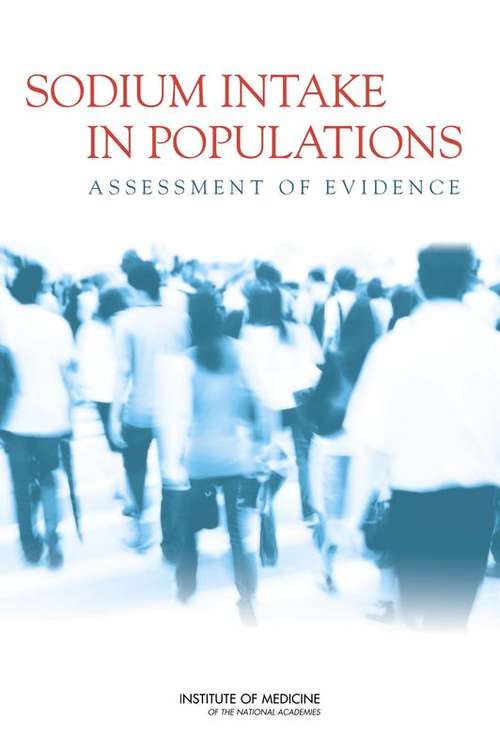 By: Institute of Medicine • Brian L. Strom • Board on Population Health and Public Health Practice • Food and Nutrition Board • Maria Oria • Ann L. Yaktine • Committee on the Consequences of Sodium Reduction in Populations
Login
Sign Up

Despite efforts over the past several decades to reduce sodium intake in the United States, adults still consume an average of 3,400 mg of sodium every day. A number of scientific bodies and professional health organizations, including the American Heart Association, the American Medical Association, and the American Public Health Association, support reducing dietary sodium intake. These organizations support a common goal to reduce daily sodium intake to less than 2,300 milligrams and further reduce intake to 1,500 mg among persons who are 51 years of age and older and those of any age who are African-American or have hypertension, diabetes, or chronic kidney disease. A substantial body of evidence supports these efforts to reduce sodium intake. This evidence links excessive dietary sodium to high blood pressure, a surrogate marker for cardiovascular disease (CVD), stroke, and cardiac-related mortality. However, concerns have been raised that a low sodium intake may adversely affect certain risk factors, including blood lipids and insulin resistance, and thus potentially increase risk of heart disease and stroke. In fact, several recent reports have challenged sodium reduction in the population as a strategy to reduce this risk. Sodium Intake in Populations recognizes the limitations of the available evidence, and explains that there is no consistent evidence to support an association between sodium intake and either a beneficial or adverse effect on most direct health outcomes other than some CVD outcomes (including stroke and CVD mortality) and all-cause mortality. Some evidence suggested that decreasing sodium intake could possibly reduce the risk of gastric cancer. However, the evidence was too limited to conclude the converse--that higher sodium intake could possibly increase the risk of gastric cancer. Interpreting these findings was particularly challenging because most studies were conducted outside the United States in populations consuming much higher levels of sodium than those consumed in this country. Sodium Intake in Populations is a summary of the findings and conclusions on evidence for associations between sodium intake and risk of CVD-related events and mortality.

Copyright:
2013 the National Academy of Sciences