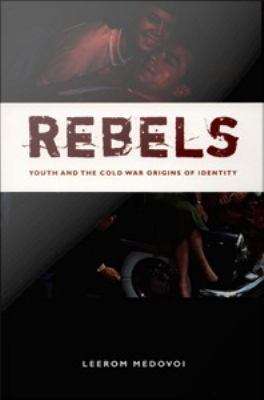 Holden Caulfield, the beat writers, Elvis Presley, Chuck Berry, and James Dean--these and other avatars of youthful rebellion were much more than entertainment. As Leerom Medovoi shows, they were often embraced and hotly debated at the dawn of the Cold War era because they stood for dissent and defiance at a time when the ideological production of the United States as leader of the "free world" required emancipatory figures who could represent America's geopolitical claims. Medovoi argues that the "bad boy" became a guarantor of the country's anti-authoritarian, democratic self-image: a kindred spirit to the freedom-seeking nations of the rapidly decolonizing third world and a counterpoint to the repressive conformity attributed to both the Soviet Union abroad and America's burgeoning suburbs at home. Alongside the young rebel, the contemporary concept of identity emerged in the 1950s. It was in that decade that "identity" was first used to define collective selves in the politicized manner that is recognizable today: in terms such as "national identity" and "racial identity. " Medovoi traces the rapid absorption of identity themes across many facets of postwar American culture, including beat literature, the young adult novel, the Hollywood teen film, early rock 'n' roll, black drama, and "bad girl" narratives. He demonstrates that youth culture especially began to exhibit telltale motifs of teen, racial, sexual, gender, and generational revolt that would burst into political prominence during the ensuing decades, bequeathing to the progressive wing of contemporary American political culture a potent but ambiguous legacy of identity politics.