The Day Rommel Was Stopped 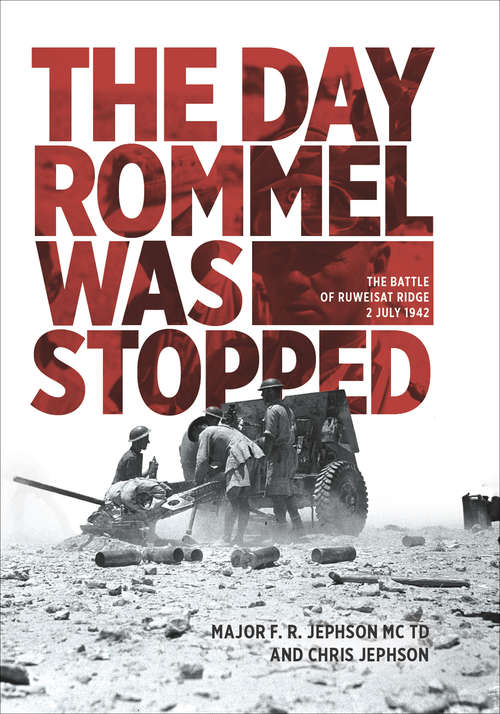 The true story of a forty-eight-hour showdown and the desperate gamble that prevented the Desert Fox from reaching the Suez Canal—and beyond.   Biographer Sir John Wheeler-Bennett once wrote, &“The actual turning of the tide in the Second World War may be accurately determined as the first week of July 1942.&” This book argues that the time may be even more exact: about 2100 hours on July 2, 1942, when Erwin Rommel&’s tanks withdrew for the first time since the fall of Tobruk on June 20, or, arguably, January 14 at El Agheila.   At dusk the day before, Rommel had broken through the center of the British defenses at El Alamein. His tanks had overwhelmed the gallant defense of the 18th Indian Infantry Brigade in Deir el Shein at the foot of the Ruweisat Ridge. At that moment, and for the next twelve hours, there was no further organized defense between the spearhead of the Afrika Korps and Alexandria. Throughout the next day, only a handful of men and guns stood between Rommel and his prize.   In Cairo, black clouds of smoke from burning files showed that many people believed Rommel would not stop short of the Suez Canal, his stated objective. But on July 3, Rommel called off his attack and ordered his troops to dig in where they stood. The Delta was saved.   Just a few weeks earlier, the 18th Indian Infantry Brigade, which took the brunt of the initial attack, and the guns of the small column known as Robcol that stopped Rommel, had been in northern Iraq. Gen. Auchinleck&’s desperate measure, pulling them 1,500 miles from Iraq into the western desert, succeeded—but if Robcol had failed, it is doubtful that Rommel would have stopped at the canal; it does not require much imagination to see his forces threatening to link up with Barbarossa in the Ukraine. This vivid account of the battle of Ruweisat Ridge, the beginning of the battle of Alamein, was written by an officer who was part of Robcol on that fateful day.