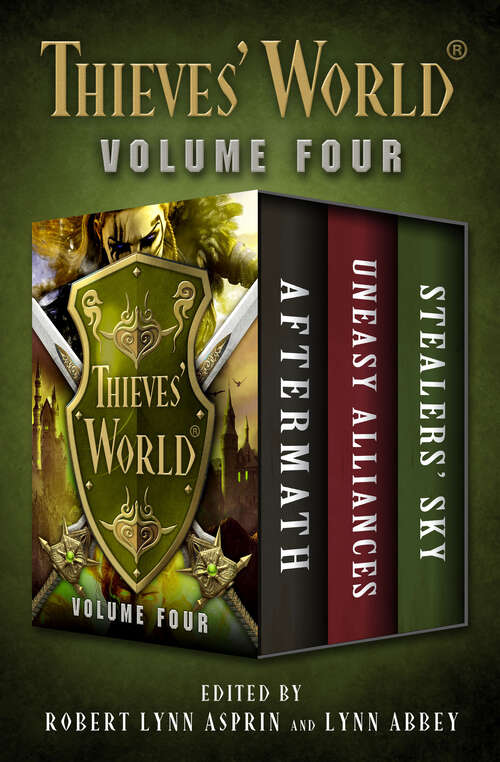 By: Robert Asprin and Lynn Abbey
Login
Sign Up

Volumes ten, eleven, and twelve bring the original, classic shared-world fantasy series to a close with an action-packed ending. As the storms of war blow past Sanctuary, the city rebuilds. Citizens work to put their lives back in order. Rights are wronged, debts are paid, and vengeance is pursued. But laborers are disappearing, a battle is brewing, and a sandstorm is blowing in from the desert, ready to envelop the city in chaos . . . Get lost in the adventure with this collection co-edited by Robert Lynn Asprin, New York Times–bestselling author of the Myth Adventures series, featuring colorful stories by fantasy&’s best authors like Lynn Abbey, Robin W. Bailey, John Brunner, C. J. Cherryh, Jon DeCles, David Drake, Duane McGowen, Janet Morris, Mark C. Perry, Andrew Offutt, Diana L. Paxson, and C. S. Williams.Praise for the Thieves&’ World® series &“It&’s a collection to be raced through, to see what will happen. And it&’s a collection to drag one&’s feet through, lest the end come too soon.&” —Fantasy-Faction &“Game of Thrones has come to an end. . . . [Here&’s] a fantasy series to fill the void. . . . You&’ll be pulled into political intrigues, watch new gods replace old, and witness fortunes rise and fall and rise again.&” —Book Riot &“Sanctuary was the city where anything could happen, where characters created by some of the best fantasy writers of the generation crossed paths and shared adventures.&” —Black Gate