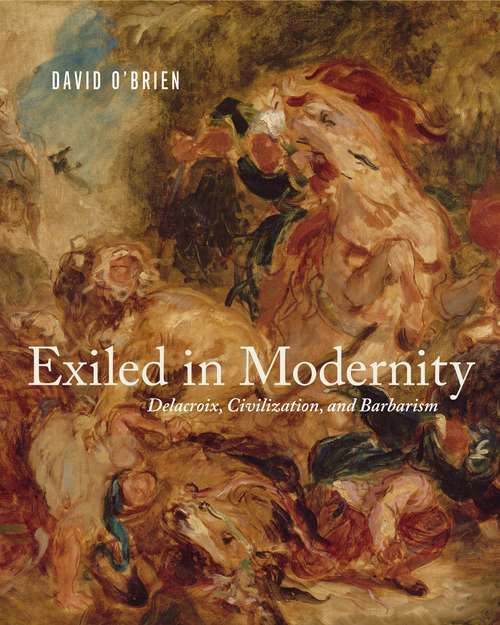 Notions of civilization and barbarism were intrinsic to Eugène Delacroix’s artistic practice: he wrote regularly about these concepts in his journal, and the tensions between the two were the subject of numerous paintings, including his most ambitious mural project, the ceiling of the Library of the Chamber of Deputies in the Palais Bourbon. Exiled in Modernity delves deeply into these themes, revealing why Delacroix’s disillusionment with modernity increasingly led him to seek spiritual release or epiphany in the sensual qualities of painting.

While civilization implied a degree of control and the constraint of natural impulses for Delacroix, barbarism evoked something uncontrolled and impulsive. Seeing himself as part of a grand tradition extending back to ancient Greece, Delacroix was profoundly aware of the wealth and power that set nineteenth-century Europe apart from the rest of the world. Yet he was fascinated by civilization’s chaotic underbelly. In analyzing Delacroix’s art and prose, David O’Brien illuminates the artist’s effort to reconcile the erudite, tradition-bound aspects of painting with a desire to reach viewers in a more direct, unrestrained manner.

Focusing chiefly on Delacroix’s musings about civilization in his famous journal, his major mural projects on the theme of civilization, and the place of civilization in his paintings of North Africa and of animals, O’Brien links Delacroix’s increasingly pessimistic view of modernity to his desire to use his art to provide access to a more fulfilling experience.With more than one hundred illustrations, this original, astute analysis of Delacroix and his work explains why he became an inspiration for modernist painters over the half-century following his death. Art historians and scholars of modernism especially will find great value in O’Brien’s work.