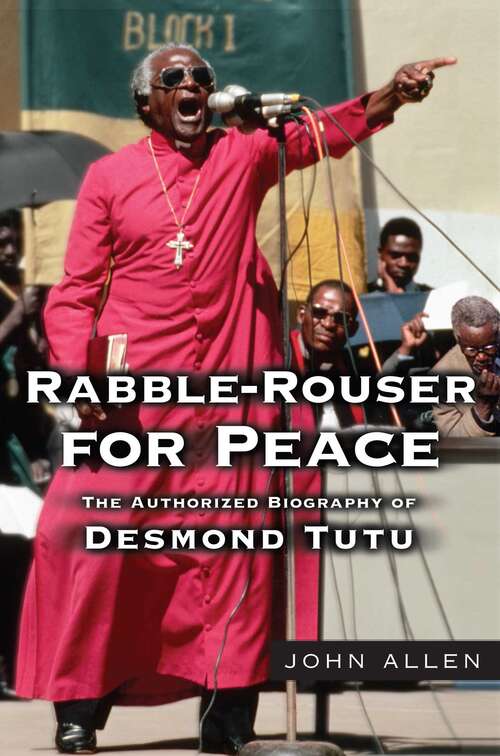 To be a rabble-rouser for peace may seem to be a contradiction in terms. And yet it is the perfect description for Desmond Tutu, Nobel laureate and spiritual father of a democratic South Africa. Tutu understood that justice -- a genuine regard for human rights -- is the only real foundation for peace. And so he stirred up trouble, courageously engaging in heated face-to-face confrontations with South Africa's leaders; he stirred up trouble in the streets, leading peaceful demonstrations amid the barely controlled fury of police battalions; he stirred up trouble on the world stage, seeking international disinvestment in the apartheid economy. Tutu has led one of the great lives of the late twentieth and early twenty-first centuries, and to read his story in full is to be reminded of the power of one inspired man to change history. In this authorized biography, written by John Allen, a distinguished journalist and longtime associate of Tutu, we are witnesses to courage, stirring oratory, and a demonstration of the power of faith to transform the seemingly intransigent. We know in retrospect that the apartheid resistance movement was successful and that South Africa, though not without its problems, today faces an infinitely brighter future than it might if it had not been for the efforts of Desmond Tutu, Nelson Mandela, and other leaders. But no such outcome was ever a certainty. Through the author's personal experiences, total access to the Tutu family and their papers, and considerable research, including the use of new archival material, Allen tells the story of a barefoot schoolboy from a deprived black township who became an international symbol of the democratic spirit and of religious faith. Allen personally observed how Tutu, at genuine risk to his own safety, repeatedly intervened between armed soldiers and stone-throwing students to keep the peace, how he faced constant death threats and angrily stood up to the leaders of the cruel apartheid system. Using his own faith as a cudgel, Tutu asked those officials to confront their own Christian background and made them reconcile their actions with their own professions of belief. Often through the sheer power of moral example and with a lyrical command of the English language, Tutu was able to appeal to the conscience of the world and to the emotions of an angry crowd in the streets. And then, when the battle for South African rights was finally won, it was Tutu who insisted on finding a path to forgive the former oppressors by strongly backing and serving on the unprecedented Truth and Reconciliation Commission. Today, the archbishop continues to appeal to the world's conscience by opposing the continuance of war and the inadequacy of the international response to the AIDS/HIV crisis sweeping Africa. He has led a life of commitment, one that continues to matter. John Allen has movingly captured the flavor and details of that life and marshaled them into a commanding story, one that sheds light on the struggles and triumphs of our times.