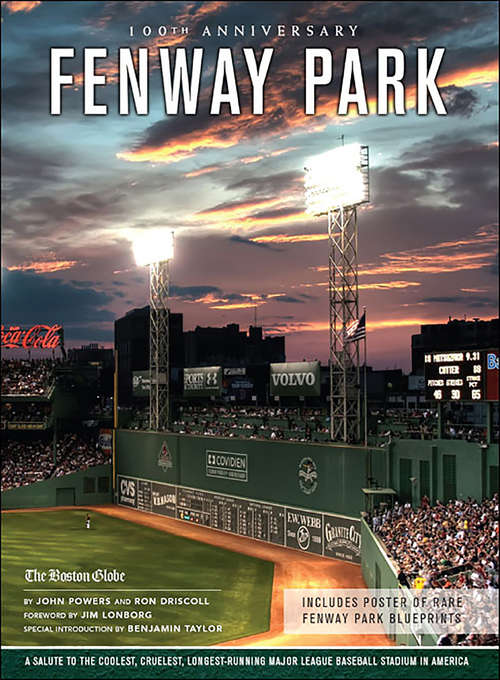 Fenway Park. The name evokes a team and a sport that have become more synonymous with a cityOCOs identity than any stadium or arena in the country. aSince opening in the same week of 1912 that the Titanic sank, the parkOCOs instantly recognizable confines have seen some of the most dramatic happenings in baseball history, including Carlton FiskOCOs OC Is it fair?OCO home run in the 1975 World Series and Ted WilliamsOCOs perfectly scripted long ball in his final at-bat. For 100 years, the Fenway faithful have been tested. They have known triumph and heartbreak, miracles and cursesOCowell, one curse in particularOCoto such a degree that an entire nation of fans heaved a collective sigh of relief when Dave Roberts stole a base by a fingertip in 2004, triggering the most amazing comeback in the gameOCOs annals. aTo sit and watch a game at Fenway is to recognize that the pitcher is standing on the same mound where Walter Johnson, Christy Mathewson, and Babe Ruth pitched, that a hitter is in the same batterOCOs box where Ty Cobb and Hank Aaron and Shoeless Joe Jackson dug in to take their swings. This is a ballpark that has embraced its odd construction quirks, including the bizarre triangle out in center field and the Green Monster that looms above the left fielder, and todayOCofor better and for worseOCoit remains largely unchanged from the day it opened. In its long history, Fenway has hosted football, hockey, soccer, boxing, and so much more. It has provided a backdrop to hundreds of historic events having nothing to do with sports, including concerts, religious gatherings, and political rallies. It was the site of Franklin Delano RooseveltOCOs final campaign address, as well as visits by music luminaries from Stevie Wonder to Bruce Springsteen to the Rolling Stones. aThrough it all, the Boston Globe has been the consistent, respected chronicler of every important moment in park history. In fact, the newspaper played a remarkable role in FenwayOCOs creation and evolution: the Taylor familyOCofounders and longtime owners of the GlobeOCoowned the ballclub in 1912, helped finance the new stadium, and renamed the team the OC Red SoxOCO. It is the GlobeOCOs insider perspective, combined with more than a century of exemplary journalism, that makes this book the definitive narrative history of both park and team, and a centennial collectorsOCO item unlike any other. Its pages offer a level of detail that is unmatched, with exceptional writing and hundreds of rarely seen photographs and illustrations. This is Fenway Park, the complete story, unfiltered and expertly told. "