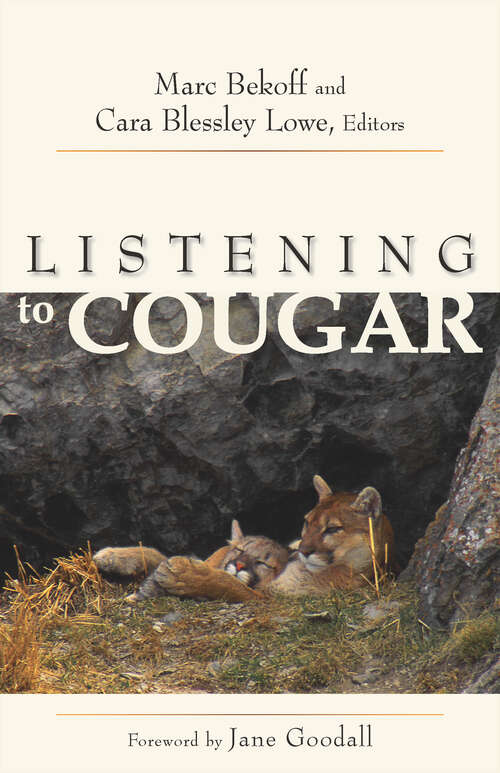 This spellbinding tribute to Puma concolor honors the big cat's presence on the land and in our psyches. In some essays, the puma appears front and center: a lion leaps over Rick Bass's feet, hurtles off a cliff in front of J. Frank Dobie, gazes at Julia Corbett when she opens her eyes after an outdoor meditation, emerges from the fog close enough for poet Gary Gildner to touch. Marc Bekoff opens his car door for a dog that turns out to be a lion. Other works evoke lions indirectly. Biologists describe aspects of cougar ecology, such as its rugged habitat and how males struggle to claim territory. Conservationists relate the political history of America's greatest cat. Short stories and essays consider lions' significance to people, reflecting on accidental encounters, dreams, Navajo beliefs, guided hunts, and how vital mountain lions are to people as symbols of power and wildness.

Marc Bekoff has published twenty books, including The Emotional Lives of Animals, and is a professor emeritus of ecology and evolutionary biology at the University of Colorado at Boulder. Writer and photographer Cara Blessley Lowe is author of Spirit of the Rockies and co-founder of The Cougar Fund.

BK Loren, in Listening to Cougar: "If the lion, in all its dark, nocturnal otherness, in all its light, internal sameness, does not exist for future generations, if we destroy its habitat, or call open season on it, what could we possibly find to replace it? It is precisely because we fear large predators that we need them. They hold within them so many things that we have lost, or are on the verge of losing, personally and collectively, permanently and forever. If we sacrifice the fear, we also sacrifice the strength, the wildness, the beauty, the awe." Foreword by Jane Goodall