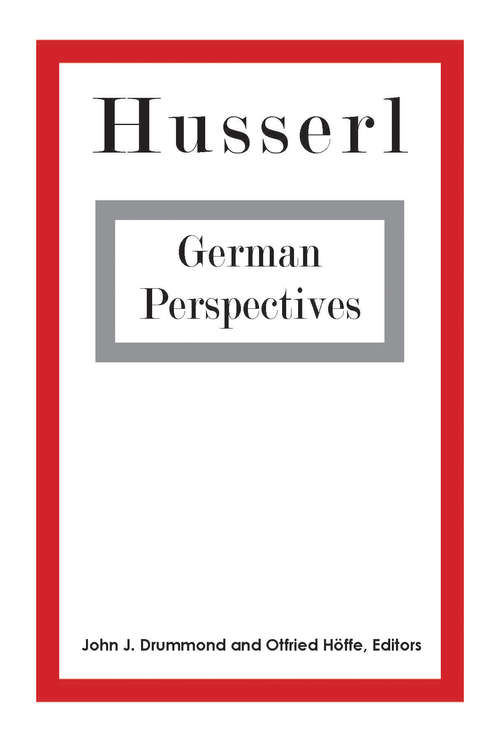 Edmund Husserl, generally regarded as the founding figure of phenomenology, exerted an enormous influence on the course of twentieth and twenty-first century philosophy. This volume collects and translates essays written by important German-speaking commentators on Husserl, ranging from his contemporaries to scholars of today, to make available in English some of the best commentary on Husserl and the phenomenological project. The essays focus on three problematics within phenomenology: the nature and method of phenomenology; intentionality, with its attendant issues of temporality and subjectivity; and intersubjectivity and culture. Several essays also deal with Martin Heidegger’s phenomenology, although in a manner that reveals not only Heidegger’s differences with Husserl but also his reliance on and indebtedness to Husserl’s phenomenology.Taken together, the book shows the continuing influence of Husserl’s thought, demonstrating how such subsequent developments as existentialism, hermeneutics, and deconstruction were defined in part by how they assimilated and departed from Husserlian insights. The course of what has come to be called continental philosophy cannot be described without reference to this assimilation and departure, and among the many successor approaches phenomenology remains a viable avenue for contemporary thought. In addition, problems addressed by Husserl—most notably, intentionality, consciousness, the emotions, and ethics—are of central concern in contemporary non-phenomenological philosophy, and many contemporary thinkers have turned to Husserl for guidance. The essays demonstrate how significant Husserl remains to contemporary philosophy across several traditions and several generations.Includes essays by Rudolf Bernet, Klaus Held, Ludwig Landgrebe, Dieter Lohmar, Verena Mayer and Christopher Erhard, Ullrich Melle, Karl Mertens, Ernst Wolfgang Orth, Jan Patočka, Sonja Rinofner-Kreidl, Karl Schuhmann, and Elisabeth Ströker.