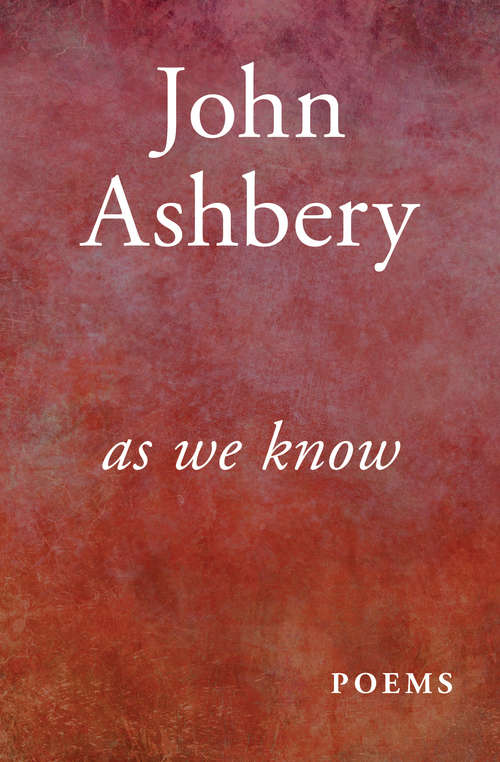 Dating from one of the most studied creative periods of John Ashbery's career, a groundbreaking collection showcasing his signature polyphonic poem "Litany" First published in 1979, four years after Ashbery's masterpiece Self-Portrait in a Convex Mirror, the poems in As We Know represent the great American poet writing at the peak of his experimental powers. The book's flagship poem, the seventy-page "Litany," remains one of the most exciting and challenging of Ashbery's career. Presented in two facing columns, the poem asks to be read as independent but countervailing monologues, creating a dialogue of the private and the public, the human and the divine, the real and the unreal--a wild and beautiful conversation that contains multitudes. As We Know also collects some of Ashbery's most witty, self-reflexive interrogations of poetry itself, including "Late Echo" and "Five Pedantic Pieces" ("An idea I had and talked about / Became the things I do"), as well as a wry, laugh-out-loud call-and-response sequence of one-line poems on Ashbery's defining subject: the writing of poetry ("I Had Thought Things Were Going Along Well / But I was mistaken"). Perhaps the most admired poem in this much-discussed volume is "Tapestry," a measured exploration of the inevitable distance that arises between art, audience, and artist, which the critic Harold Bloom called "an 'Ode on a Grecian Urn' for our time." Built of doubles, of echoes, of dualities and combinations, As We Know is the breathtaking expression of a singular American voice.