Years of Plenty, Years of Want 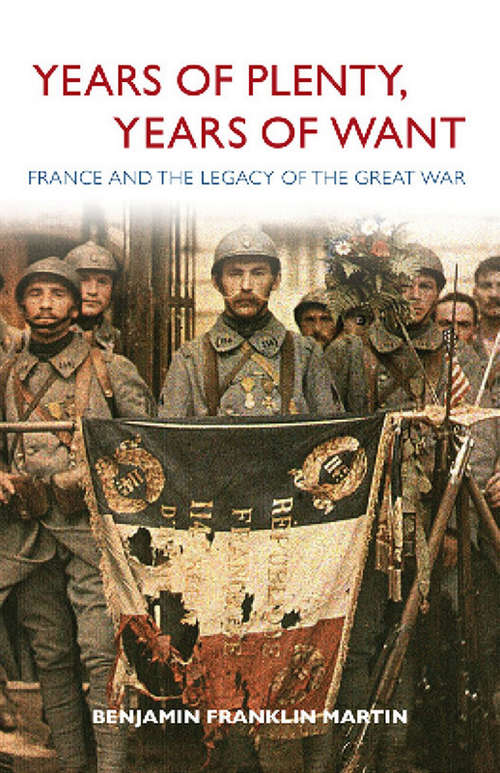 The Great War that engulfed Europe between 1914 and 1918 was a catastrophe for France. French soil was the site of most of the fighting on the Western Front. French dead were more than 1.3 million, the permanently disabled another 1.1 million, overwhelmingly men in their twenties and thirties. The decade and a half before the war had been years of plenty, a time of increasing prosperity and confidence remembered as the Belle Epoque or the good old days. The two decades that followed its end were years of want, loss, misery, and fear. In 1914, France went to war convinced of victory. In 1939, France went to war dreading defeat. To explain the burden of winning the Great War and embracing the collapse that followed, Benjamin Martin examines the national mood and daily life of France in July 1914 and August 1939, the months that preceded the two world wars. He presents two titans: Georges Clemenceau, defiant and steadfast, who rallied a dejected nation in 1918, and Edouard Daladier,hesitant and irresolute, who espoused appeasement in 1938 though comprehending its implications. He explores novels by a constellation of celebrated French writers who treated the Great War and its social impact, from Colette to Irène Némirovsky, from François Mauriac to Antoine de Saint-Exupéry. And he devotes special attention to Roger Martin du Gard, the1937 Nobel Laureate, whose roman-fleuve The Thibaults is an unrivaled depiction of social unraveling and disillusionment. For many in France, the legacy of the Great War was the vow to avoid any future war no matter what the cost. They cowered behind the Maginot Line, the fortifications along the eastern border designed to halt any future German invasion. Others knew that cost would be too great and defended the "Descartes Line": liberty and truth, the declared values of French civilization. In his distinctive and vividly compelling prose, Martin recounts this struggle for the soul of France.