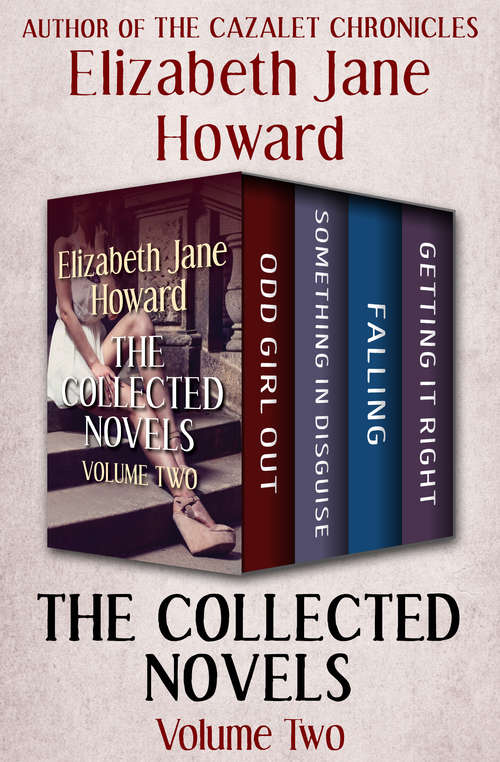 A quartet of witty, perceptive novels from the international bestselling author of the Cazalet Chronicles and a “compelling storyteller” (The Guardian). Best-known for the five novels that comprise her million-selling Cazalet Chronicles, which was made into a BBC television series, British novelist Elizabeth Jane Howard wrote about upper middle-class English life in the twentieth century with a “poetic eye” and “penetrating sanity” (Martin Amis). Her highly acclaimed literary fiction is “shrewd and accurate in human observation, with a fine ear for dialogue and an evident pleasure in the English language and landscape” (The Guardian). Collected here are four of her finest novels about the delight and dangers of desire. Odd Girl Out: When beautiful, wealthy, shiftless, twenty-two-year-old Arabella Dawick comes to stay one summer with Anne and Edmund Cornhill, their once-idyllic marriage becomes a domestic minefield of desires and secrets. “A unique blend of high comedy and acute psychology.” —Hilary Mantel Something in Disguise: One could characterize May’s unwise second marriage to Col. Herbert Brown-Lacy as a “death worse than fate.” The ripple effects of this unhappy union—on May herself; her own adult offspring, Oliver and Elizabeth; as well as her stepdaughter Alice, who is impulsively getting married to escape—lead to surprising and satisfying outcomes. “Astute, experienced, vulnerable, and it reads with incomparable ease.” —Kirkus Reviews Falling: In the wake of a painful divorce, sixtyish playwright Daisy Langrish buys a weekend cottage in the country. When Henry Kent shows up looking for work, Daisy hires him as a caretaker. Despite her wariness, she begins to fall for her charming employee. Slowly and with masterful skill, the aging con man seduces Daisy, drawing her into his spiraling web of lies and deception. “Troubling, subtle, and distinctive . . . Completely unputdownable.” —The Independent Getting It Right: Thirty-one-year-old virgin Gavin Lamb is a shy hairdresser in London’s West End who still lives at home with his parents. But meeting two women at a party—an oversexed married millionairess named Joan and bon vivant who goes by Lady Minerva Munday—will shake up his quest for true love. Howard wrote the screenplay for the film adaption of this delightful social comedy, featuring Helena Bonham Carter as Minerva and Lynn Redgrave as Joan. “Howard scores again—with a wry social comedy . . . Total delight.” —Kirkus Reviews