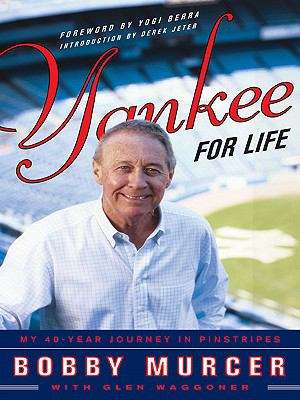 As he stepped to the plate at Yankee Stadium on opening day in 1966, Bobby Murcer carried with him the hopes and expectations of Yankees fans looking for the next Mickey Mantle. Bobby wasn't the next Mick, of course, but he became one of the most beloved Yankees of all time.

Yankee for Life is Murcer's account of his stellar career as both a player and an Emmy Award-winning broadcaster. With self-effacing humor and down-home charm, he shares fascinating and illuminating anecdotes about former teammates, bosses, and the new generation of Yankees superstars--Rivera, Jeter, Rodriguez--whom he watched grow up from the broadcast booth. With candor, courage, and a refreshing dose of wit, he tells of his battle with brain cancer, explaining how the love of his wife and family, his deep religious faith, and the passionate support of fans helped see him through his ordeal.

Bobby Murcer may not have achieved the celebrity of some of his fellow players, but ultimately he was what fans always wanted him to be: a Yankee for life.