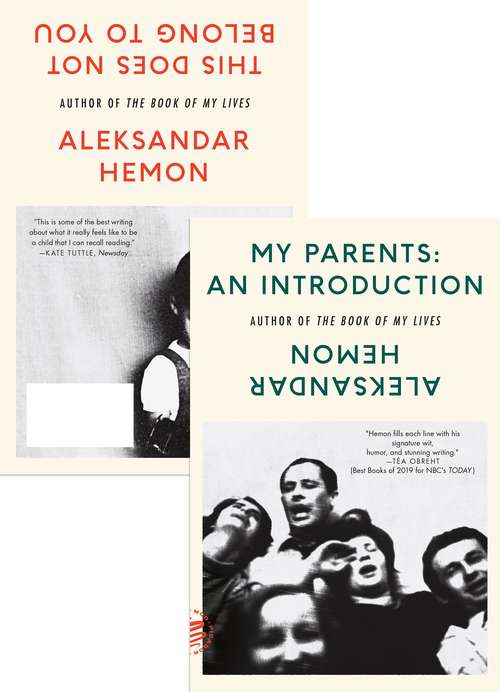 Two books in one in a flip dos-à-dos format: The story of Aleksandar Hemon’s parents’ immigration from Sarajevo to Canada and a book of short memories of the author’s family, friends, and childhood in SarajevoIn My Parents, Aleksandar Hemon tells the story of his parents’ immigration to Canada—of the lives that were upended by the war in Bosnia and siege of Sarajevo and the new lives his parents were forced to build. As ever with his work, he portrays both the perfect, intimate details (his mother’s lonely upbringing, his father’s fanatical beekeeping) and a sweeping, heartbreaking history of his native country. It is a story full of many Hemons, of course—his parents, sister, uncles, cousins—and also of German occupying forces, Yugoslav partisans, royalist Serb collaborators, singing Ukrainians, and a few befuddled Canadians.My Parents is Hemon at his very best, grounded in stories lovingly polished by retelling, but making them exhilarating and fresh in writing, summoning unexpected laughs in the midst of the heartbreaking narratives. This Does Not Belong to You, meanwhile, is the exhilarating, freewheeling, unabashedly personal companion to My Parents—a perfect dose of Hemon at his most dazzling and untempered in a series of beautifully distilled memories and observations and explosive, hilarious, poignant miniatures. Presented dos-à-dos with My Parents, it complements and completes a major work from a major writer.In the words of Colum McCann, “Aleksandar Hemon is, quite frankly, the greatest writer of our generation.” Hemon has never been better than here in these pages. And the moment has never been more ready for his voice, nor has the world ever been more in need of it.