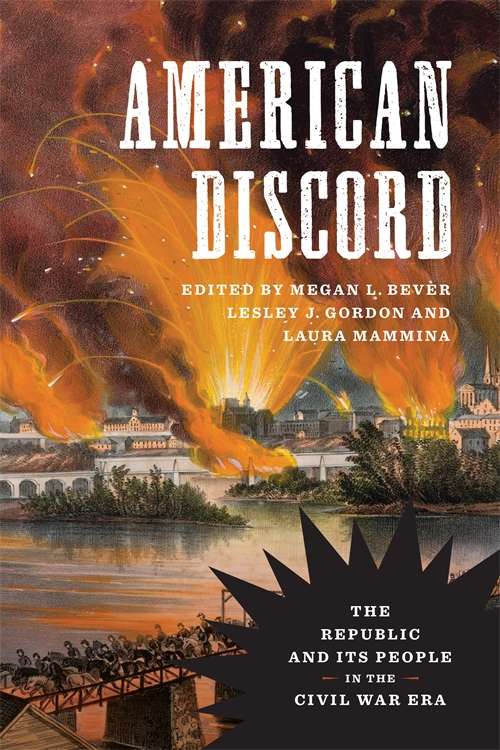 A panoramic collection of essays written by both established and emerging scholars, American Discord examines critical aspects of the Civil War era, including rhetoric and nationalism, politics and violence, gender, race, and religion. Beginning with an overview of the political culture of the 1860s, the collection reveals that most Americans entered the decade opposed to political compromise. Essays from Megan L. Bever, Glenn David Brasher, Lawrence A. Kreiser Jr., and Christian McWhirter discuss the rancorous political climate of the day and the sense of racial superiority woven into the political fabric of the era.Shifting focus to the actual war, Rachel K. Deale, Lindsay Rae Privette, Adam H. Petty, and A. Wilson Greene contribute essays on internal conflict, lack of compromise, and commitment to white supremacy. Here, contributors adopt a broad understanding of “battle,” considering environmental effects and the impact of the war after the battles were over. Essays by Laura Mammina and Charity Rakestraw and Kristopher A. Teters reveal that while the war blurred the boundaries, it ultimately prompted Americans to grasp for the familiar established hierarchies of gender and race.Examinations of chaos and internal division suggest that the political culture of Reconstruction was every bit as contentious as the war itself. Former Confederates decried the barbarity of their Yankee conquerors, while Republicans portrayed Democrats as backward rubes in need of civilizing. Essays by Kevin L. Hughes, Daniel J. Burge, T. Robert Hart, John F. Marszalek, and T. Michael Parrish highlight Americans’ continued reliance on hyperbolic rhetoric. American Discord embraces a multifaceted view of the Civil War and its aftermath, attempting to capture the complicated human experiences of the men and women caught in the conflict. These essays acknowledge that ordinary people and their experiences matter, and the dynamics among family members, friends, and enemies have far-reaching consequences.