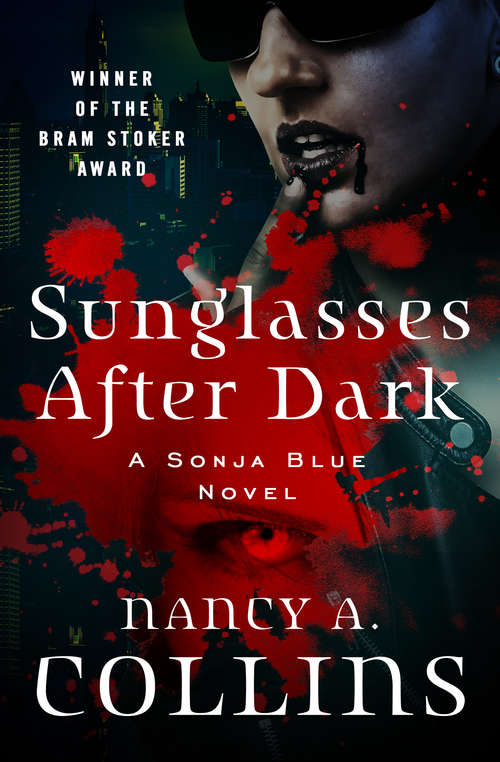 Sunglasses After Dark, by award-winning author Nancy A. Collins, tells the story of a punk female vampire/vampire-hunter searching for the man responsible turning her into one of the undeadOne spring night in London, heiress Denise Thorne disappears while partying at a nightclub, never to be seen again. That very same night, Sonja Blue, a tough-as-nails punk vampire/vampire-slayer, conceived in terror and blood, is borne from the city's gutters. Saved by modern medicine before she could die, she is a living vampire who still possesses a soul and is determined to fight for what remains of her humanity. In the years since her bizarre resurrection, Sonja Blue travels the globe, hunting down and disposing of those creatures that prey on the innocent while searching for the vampire Noble who created her. But when she investigates a sleazy televangelist named Catherine Wheele, who is exploiting Denise Thorne's parents, Sonja finds herself up against a powerful inhuman adversary. But as dangerous as Catherine Wheele proves to be, Sonja's greatest foe remains the Other, the demonic personality with whom she is locked in a constant battle for control of their shared body. Can Sonja Blue overcome her inner demon in time to rescue an innocent man from Catherine Wheele's unholy clutches? Acknowledged as one of the first Urban Fantasy novels, Sunglasses After Dark burst onto the fantasy/horror scene in 1989, garnering widespread critical praise and winning the Horror Writers Association's coveted Bram Stoker Award, as well as the British Fantasy Society's Icarus Award. Out of print for several years, this edition of Sunglasses After Dark has been extensively revised and edited by the author, and is now considered the preferred text.