A Picture Book of Sojourner Truth 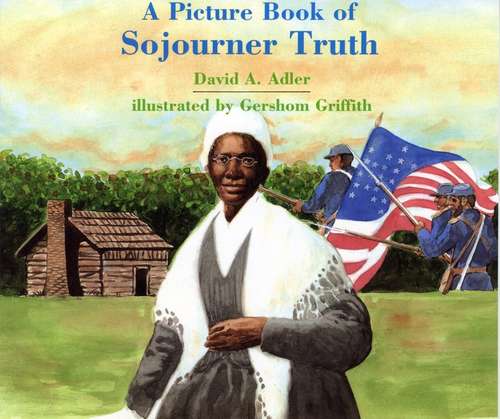 From the Book Jacket:

Sojourner Truth was born into slavery in 1797 in Hurley, New York. Her parents named her Isabella, but she renamed herself Sojourner Truth years later, when she was free. Isabella worked for many different masters before joining a religious community called the "Kingdom of God." After being falsely accused of poisoning the group's leader, she decided to leave New York and "sojourn"-visit different places-and preach. She spoke out on religious issues, the evils of slavery, and the rights of women.

During the Civil War, Sojourner raised money to help feed African-American soldiers and cared for slaves who had escaped north to freedom. She died in 1883 and is remembered for her bold, outspoken role in the struggle for freedom for all people.

David A. Adler's Picture Book Biographies have been hailed as an "expert mixture of facts and personality" (School Library Journal) and "handsomely designed" (Booklist).

Mr. Adler lives in New York with his wife and three sons.

Gershom Griffith has illustrated one other picture book, Jumping the Broom by Courtni C. Wright. He divides his time between New York City and Marietta, Georgia.