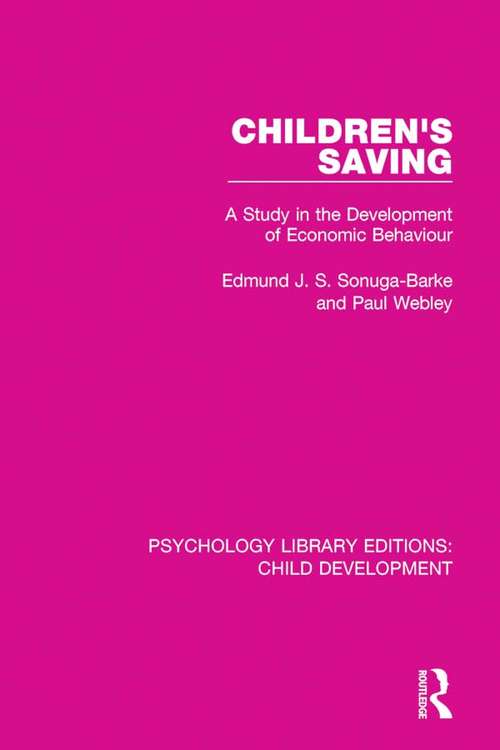 Originally published in 1993, this book presents an alternative approach to the study of the emergence of economic awareness during childhood: a new developmental economic psychology!

In the past, attempts to study the emergence of children’s economic consciousness have failed to take account of the practical nature of the "economic" in the history of western cultures. Economic socialisation has been seen as the acquisition of abstract knowledge about the institutions of adult economic culture. The child has been seen as a spectator, acquiring knowledge of that culture, but never really a part of it.

However, economic actions, in essence, are directed not towards the attainment of knowledge, but rather towards the practical solution of problems of resource allocation imposed by constraint. Children, just like adults, are faced with practical problems of resource allocation. Their response to these problems may be different from those of adults but no less "economic" for that.

This realisation forms the heart of this book. In it children are seen as both inhabitants of their own "playground" economic subculture and actors in the wider economic world of adults, solving, or attempting to solve, practical economic problems.

In order to highlight this "child-centred" approach, the authors studied the way children tackle the particular problems posed by limitations of income. How do children learn (a) the relationship between choices available in the present and the future, (b) to spread their limited financial resources over time into the future and (c) about the strategies, such as banking, that allow them to protect those resources from threats and temptations? In short, how do children learn to save?

This volume goes some way to answering these and related questions and in so doing sets up an alternative framework for the study of the emergence of economic awareness.