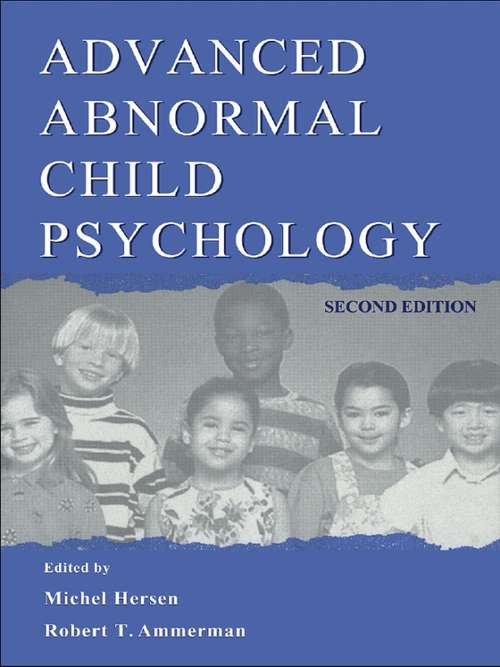 There was a time when abnormal child psychology was the stepchild of abnormal psychology, with perhaps one or two chapters in an entire advanced textbook devoted to children. Given the explosive amount of new research on child development in general since the 1980s, "stepchild" is obviously no longer a valid characterization. Indeed, in the last 15 years, many new journals devoted to childhood problems have made their appearance on library bookshelves. The first edition of this book was assembled in an effort to integrate the empirical and clinical literatures and show the advanced undergraduate and beginning graduate student the breadth and depth of our existing knowledge about the disorders that manifest themselves early in development. Now, since its publication in 1995, a great deal more work has been done. This revised and expanded second edition includes much new material from the first edition authors and from several new ones, all respected experts in the field. Part I offers an overview. It outlines: *historical developments with documentation of the neglect and abuse that children suffered at the hands of society well into the 20th century; *developmental psychopathology as a theoretical framework to guide research and clinical efforts; *psychophysiological determinants of behavior, with special attention focused on childhood autism, and attention deficit and antisocial conduct disorders; *theoretical, methodological, and practical considerations involved in determining investigatory paths including sampling, design selection, measurement, data analysis, and pragmatics; and *the reactions of children, families, and society to complex and diverse child health problems. Part II addresses assessment and treatment issues. It discusses: *behavioral treatment of childhood disorders and multiple case examples of commonly used techniques; *new developments in pharmacological treatment and sound guidelines for the consideration of pharmacotherapy; and *formulations and a review of preventive interventions. Part III examines specific disorders of childhood and adolescence. It discusses: *anxiety disorders, affective and mood disorders, mental retardation, autism, specific developmental disorders, conduct disorder, attention-deficit hyperactivity disorder (ADHD), and eating disorders; *psychological aspects of pediatric disorders--interventions tailored to the needs of the child and family to maximize adaptation and recovery; and *substance use disorders--ranging from models emphasizing social influences to those focusing on biological vulnerabilities. Each chapter in Part III has an identical structure--clinical description, causes, course, familial contributions, psychological and genetic influences, current treatments, summary--and includes numerous case illustrations.