The European Union and Human Security 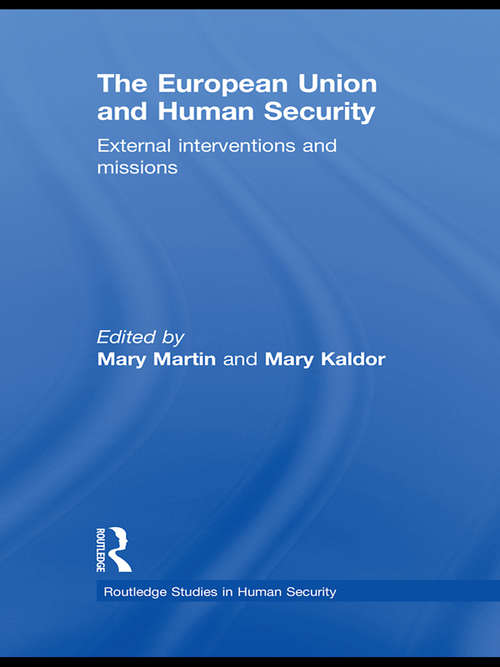 This edited book examines European external interventions in human security, in order to illustrate the evolution and nature of the European Union as a global political actor.

In 2003, the EU deployed its first external mission under the European Security and Defence Policy (ESDP) with a military force to the former Yugoslav Republic of Macedonia. Since then it has instigated over 18 civilian and military missions to deal with humanitarian crises all over the world. This book presents a series of eight case studies of external interventions by the EU covering the Balkans, Africa, the Middle East, Afghanistan and Indonesia, to illustrate the nature of the EU as a global actor. Using the concept of human security to assess the effectiveness of these missions in meeting the EU’s aim of being a ‘force for good in the world’, this study addresses two key issues: the need for an empirical assessment of EU foreign and security policies based on EU intervention in conflict and post-conflict situations and the idea of 'human security' and how this is applied in European foreign policy.

This book will be of great interest to students of European Security, EU politics, human security, post-conflict reconstruction, and IR in general.

Mary Kaldor is Co-Director of the Centre for the Study of Global Governance, London School of Economics and Political Science (LSE). Prior to this she worked at Sussex University as Jean Monnet Reader in Contemporary European Studies.

Mary Martin is a Research Fellow at the Centre for the Study of Global Governance, the London School of Economics. From 2006-2009 she was co-ordinator of the Human Security Study Group. She was formerly a foreign correspondent and European editor for The Daily Telegraph and Guardian newspapers.