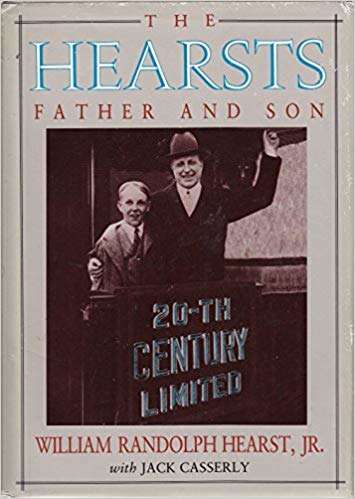 From San Juan Hill to San Simeon, from Patton's tanks to the Symbionese Liberation Army, the Hearst name has been at the forefront of American life for over a century.

As founder of the largest U.S. prewar media empire, William Randolph Hearst, Sr., forever changed the face of American journalism by using his newspapers to aid in forcing the outbreak of the Spanish-American War. As a public figure he was larger than life, first as ambitious congressman, then as reclusive yet active businessman in the famous castle that rises above the Pacific at San Simeon. The elder Hearst was known for his extravagance as well as his long affair with Marion Davies, images that were highly embellished in Orson Welles' reproach of the Hearst persona, Citizen Kane.

In The Hearsts: Father and Son, William Randolph Hearst, Jr., and co-author Jack Casserly tell the extraordinary story of an American family from the gold-diggings of California to the present Hearst media empire. They also profile a cavalcade of reporters and columnists who became the stars of the Hearst newspapers, and portray the colorful New York nightlife of the 1930s and 1940s.