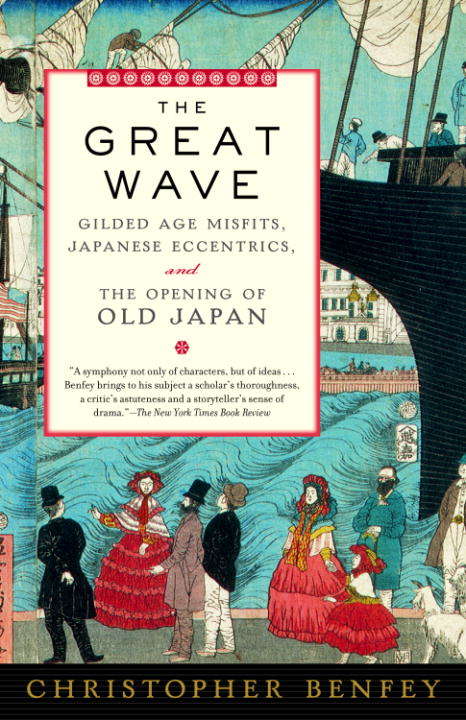 When the United States entered the Gilded Age after the Civil War, argues cultural historian Christopher Benfey, the nation lost its philosophical moorings and looked eastward to "Old Japan," with its seemingly untouched indigenous culture, for balance and perspective. Japan, meanwhile, was trying to reinvent itself as a more cosmopolitan, modern state, ultimately transforming itself, in the course of twenty-five years, from a feudal backwater to an international power. This great wave of historical and cultural reciprocity between the two young nations, which intensified during the late 1800s, brought with it some larger-than-life personalities, as the lure of unknown foreign cultures prompted pilgrimages back and forth across the Pacific. In The Great Wave, Benfey tells the story of the tightly knit group of nineteenth-century travelers--connoisseurs, collectors, and scientists--who dedicated themselves to exploring and preserving Old Japan. As Benfey writes, "A sense of urgency impelled them, for they were convinced--Darwinians that they were--that their quarry was on the verge of extinction." These travelers include Herman Melville, whose Pequod is "shadowed by hostile and mysterious Japan"; the historian Henry Adams and the artist John La Farge, who go to Japan on an art-collecting trip and find exotic adventures; Lafcadio Hearn, who marries a samurai's daughter and becomes Japan's preeminent spokesman in the West; Mabel Loomis Todd, the first woman to climb Mt. Fuji; Edward Sylvester Morse, who becomes the world's leading expert on both Japanese marine life and Japanese architecture; the astronomer Percival Lowell, who spends ten years in the East and writes seminal works on Japanese culture before turning his restless attention to life on Mars; and President (and judo enthusiast) Theodore Roosevelt. As well, we learn of famous Easterners come West, including Kakuzo Okakura, whose The Book of Tea became a cult favorite, and Shuzo Kuki, a leading philosopher of his time, who studied with Heidegger and tutored Sartre. Finally, as Benfey writes, his meditation on cultural identity "seeks to capture a shared mood in both the Gilded Age and the Meiji Era, amid superficial promise and prosperity, of an overmastering sense of precariousness and impending peril."