Communist Parties in the Middle East 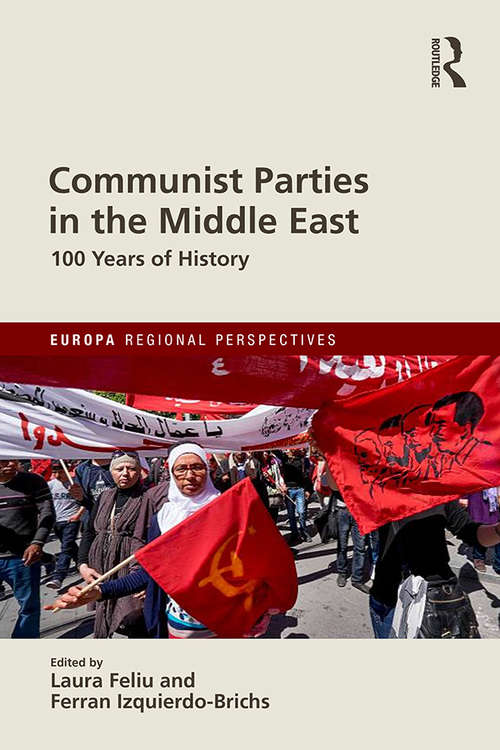 Communist Parties in the Middle East: 100 Years of History

One hundred years since the Russian Revolution, Communist parties have undergone great changes, in an evolution that has affected the entire Left and the social movements. Given that the impact of Communist parties and their evolution in the Middle East is a topic that has not been widely researched, Communist parties in the Middle East. 100 years of history aims to cover a century in the lives of these parties, from the moment the Communist ideology first reached the region in the early 20th century (brought by activists from minority groups) and the creation of the first parties and trades unions after the 1917 revolution, right up to the upheaval caused by the dissolution of the USSR and, more recently, the Arab Spring. The book has been designed to offer a unique, updated and comprehensive study of Communist parties in the Middle East, based on both a theoretical framework of analysis and substantial empirical research and archive documentation.

Several issues are examined in this work. When the Russian Revolution took place, the Middle Eastern region as a whole was under colonial control. This meant taking decisions related to the relationship between the class struggle and the national struggle. The composition of the communist parties in the Middle East is also analysed as is their role as the vanguard –understood in the broad sense of the word– in relation to the objectives of liberation, emancipation, revolution and system change or reform, and their connection to mass or popular movements. Furthermore, the volume looks back at the dependency or autonomy of communist parties during the Cold War and the tensions that this generated in them, as well as the search for individual constructions of communism that took into account cultural characteristics and the local context of the struggle. In this respect, one of the recurring themes in the work is the relationship between communist activism and the sectors that mobilized in the name of nationalism or political Islam. Finally, the chapters trace the history of the parties, including –for the first time in the literature– the post-Cold War period and continuing to the current situation, in which communist parties occupy a residual position in the political field, sharing space with other small groups from the real Left, new programmes adapted to neoliberal advancement in the region and the new mobilizations symbolized by the uprisings of 2010-2011.

The first section of the book presents the evolution of the CPs in Iran, Turkey, Iraq, Lebanon, Syria, Palestine and Israel, Egypt, South Yemen, Sudan, Algeria and Morocco. The second section explores some cross-cutting issues that have affected relations between the communist parties and other political sectors: political Islam and the New Left. Through the testimony of some leading figures, it presents the arguments around the question of gender in the Arab world and in leftist circles as well as an example of the evolution of a female leftist activist, some contradictions and the prominent debates from the most convulsive years to the present.