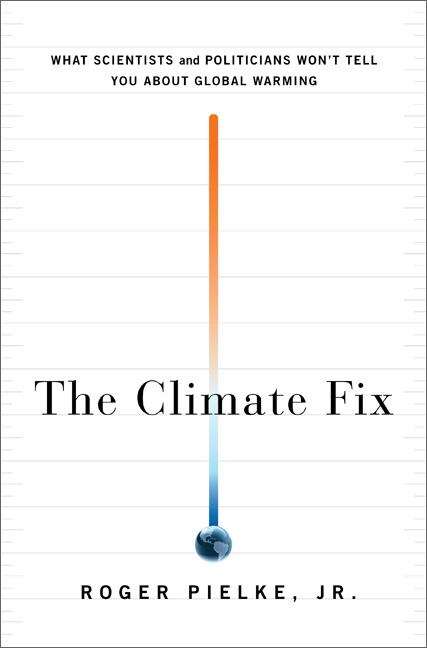 In The Climate Fix, Roger Pielke, Jr., a political scientist and a world-renowned expert on he intersection of politics and science, dissects the climate debate and diagnoses what has gone wrong and who's to blame for the mess. His answers will surprise you--it is the people who are best positioned to see clearly why we need to respond to climate change who are, more often than not, the people who get in the way of anything being accomplished.

How is that possible? Quite simply, it's because most supporters of action on climate change, whether scientists, politicians, or activists, have gotten caught up in a vicious cycle. It begins with the belief that there is insufficient political will for action. Fixing this, it is assumed, requires that everyone agree on all aspects of climate change--both the dangers and the remedies. Accomplishing that means scaring people in the hope that fear will accomplish what reason has not. Fear often requires politicizing science, shaping its presentation in an effort to motivate a specific political outcome. But rather than making action more likely the posturing reinforces a state of inaction. Thus the cycle continues, and its malign influence can be felt in all quarters, from the halls of government and academia to the newspaper and your favorite dog.

Pielke lays these problems bare for all to see. But he does more than just wag his finger. The Climate Fix presents first steps on a better path, one that returns to what really matters in the climate debate: expanding energy access (including for the 1.3 billion people worldwide who have none) and increasing energy security while lowering costs through technological innovation. Without those goals, Pielke argues, well never wean ourselves off carbon-heavy energy, whatever the hard-core environmentalists say. With them, we can not only help save our own lives but also improve everyone's, and turn a vicious cycle into a virtuous one.

It is time to do something about climate change. We can keep trying to do it the old way, or we can try something new, something offensive to neither our livelihoods nor our common sense. The choice, even after years of muddy debate, should be clear. Which will you choose?