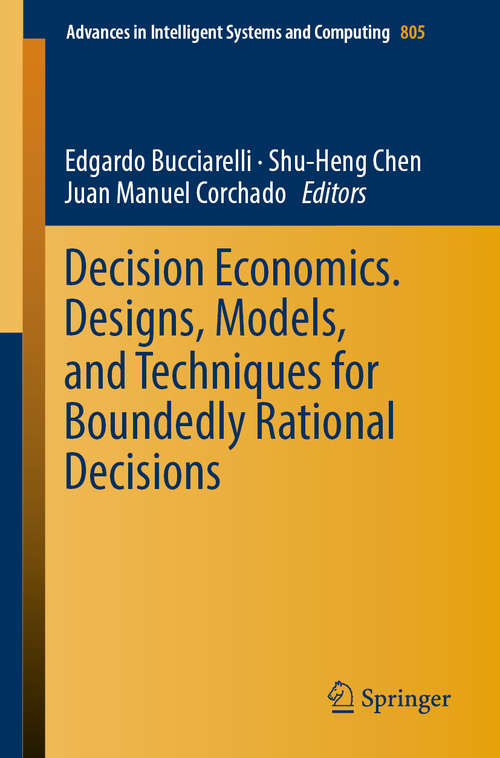 The special session on Decision Economics (DECON) is a scientific forum held annually, which is focused on sharing ideas, projects, research results, models, and experiences associated with the complexity of behavioural decision processes and socio‐economic phenomena. In 2018, DECON was held at Campus Tecnológico de la Fábrica de Armas, University of Castilla-La Mancha, Toledo, Spain, as part of the 15th International Conference on Distributed Computing and Artificial Intelligence.

For the third consecutive year, this book have drawn inspiration from Herbert A. Simon’s interdisciplinary legacy and, in particular, is devoted to designs, models, and techniques for boundedly rational decisions, involving several fields of study and expertise. It is worth noting that the recognition of relevant decision‐making takes place in a range of critical subject areas and research fields, including economics, finance, information systems, small and international business management, operations, and production. Therefore, decision‐making issues are of fundamental importance in all branches of economics addressed with different methodological approaches.

As a matter of fact, the study of decision‐making has become the focus of intense research efforts, both theoretical and applied, forming a veritable bridge between theory and practice as well as science and business organisations, whose pillars are based on insightful cutting‐edge experimental, behavioural, and computational approaches on the one hand, and celebrating the value of science as well as the close relationship between economics and complexity on the other.

In this respect, the international scientific community acknowledges Herbert A. Simon’s research endeavours to understand the processes involved in economic decision‐making and their implications for the advancement of economic professions. Within the field of decision‐making, indeed, Simon has become a mainstay of bounded rationality and satisficing. His rejection of the standard (unrealistic) decision‐making models adopted by neoclassical economists inspired social scientists worldwide with the purpose to develop research programmes aimed at studying decision‐making empirically, experimentally, and computationally. The main achievements concern decision‐making for individuals, firms, markets, governments, institutions, and, last but not least, science and research. This book of selected papers tackles these issues that Simon broached in a professional career spanning more than sixty years. The Editors of this book dedicated it to Herb.