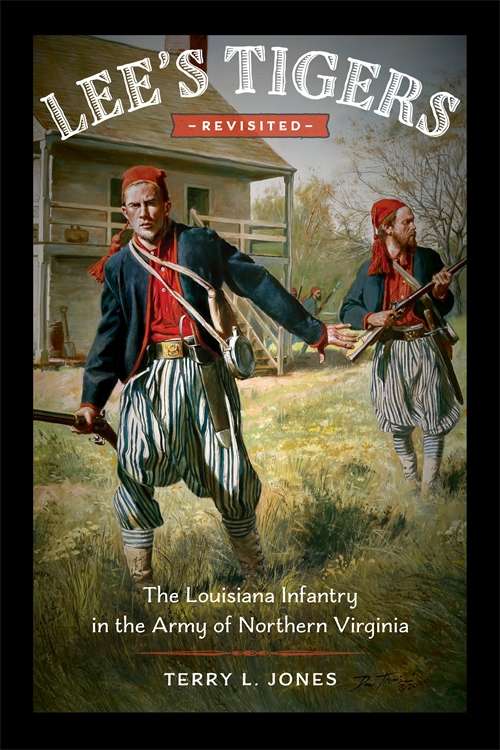 In Lee’s Tigers Revisited, noted Civil War scholar Terry L. Jones dramatically expands and revises his acclaimed history of the approximately twelve thousand Louisiana infantrymen who fought in Robert E. Lee’s Army of Northern Virginia. Sometimes derided as the “wharf rats from New Orleans” and the “lowest scrappings of the Mississippi,” the Louisiana Tigers earned a reputation for being drunken and riotous in camp, but courageous and dependable on the battlefield. Louisiana’s soldiers, some of whom wore colorful uniforms in the style of French Zouaves, reflected the state’s multicultural society, with regiments consisting of French-speaking Creoles and European immigrants. Units made pivotal contributions to many crucial battles—resisting the initial Union onslaught at First Manassas, facilitating Stonewall Jackson’s famous Valley Campaign, holding the line at Second Manassas by throwing rocks when they ran out of ammunition, breaking the Union line temporarily at Gettysburg’s Cemetery Hill, containing the Union breakthrough at Spotsylvania’s Bloody Angle, and leading Lee’s attempted breakout of Petersburg at Fort Stedman. The Tigers achieved equal notoriety for their outrageous behavior off the battlefield, so much so that sources suggest no general wanted them in his command. By the time of Lee’s surrender at Appomattox, there were fewer than four hundred Louisiana Tigers still among his troops. Lee’s Tigers Revisited uses letters, diaries, memoirs, newspaper articles, and muster rolls to provide a detailed account of the origins, enrollments, casualties, and desertion rates of these soldiers. Illustrations—including several maps newly commissioned for this edition—chart the Tigers’ positions on key battlefields in the tumultuous campaigns throughout Virginia. By utilizing first-person accounts and official records, Jones provides the definitive study of the Louisiana Tigers and their harrowing experiences in the Civil War.