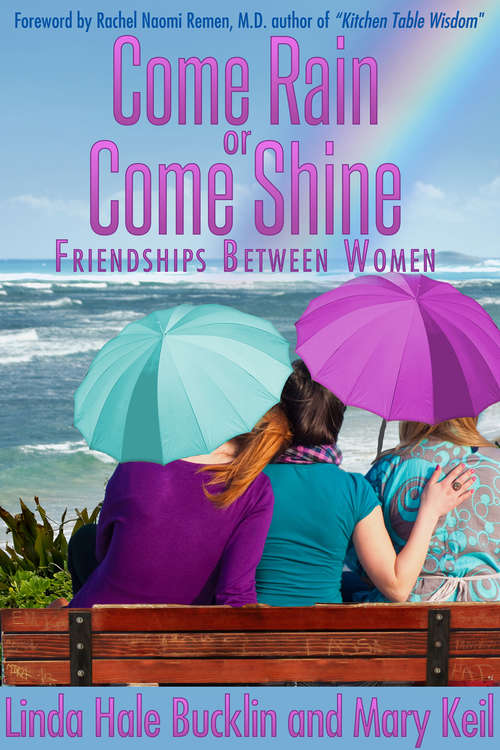 "Friendships between women can be a place of refuge from loneliness and indifference, a place where we can know we matter as we are." ~Rachel Naomi Remen, M.D. Author, Kitchen Table WisdomAs this compilation of stories teaches, friendship between women rarely happens automatically—that's what makes it special. Sometimes the circumstances of life—like moving to a new city, or losing your job, or entering your child in school—create an opportunity. But the act of friendship is intentional.Openness is a key ingredient even though recognition of a woman as a friend may require time. Friendship must often go through crisis or trial, some event that forges a bond and solidifies trust. The themes of difficulty and betrayal are woven into these stories, for the authors wisely know that friendship between women must be tested.Sometimes it takes painful and disappointing experiences to begin to value ourselves as friends. Some of us need to learn that what we offer in friendship is rich and worth its weight in gold. We must learn discernment about when to offer it and when it must be withdrawn because the other is not able to appreciate the potential gift of friendship.These short, compact stories are meant to be savored and reflected upon. They can be read slowly over lazy days or used as a morning reflection before running off to work. What they offer is a small but clear view of the female heart through the lens of friendship."There is something easy, something flowing, something sacred that can go on between women. Linda Bucklin and Mary Keil have modeled this in their work together. They are close friends, and out of that friendship comes this book." ~ The Reverend Dr. Lauren ArtressOTHER TITLES by Linda Hale BucklinBeyond His Control - Memoir of a Disobedient DaughterThe Love of AngelsABOUT THE AUTHORS:A fourth-generation San Franciscan, Linda Hale Bucklin now lives in Mill Valley CA. She recently lost her beloved husband of forty years, yet she feels so blessed to be surrounded by her three grown sons, two daughters-in-law and four grandchildren.She has worked in public relations and as a freelance writer. Her articles have appeared in HOUSE AND GARDEN, JOURNAL OF COMMERCE and NOB HILL GAZETTE.In 1999, together with Mary Keil, she co-authored COME RAIN OR COME SHINE, published by Adams Media. In 2008, her second book BEYOND HIS CONTROL, MEMOIR OF A DISOBEDIENT DAUGHTER, was published. The book went on to become a New York Times Best Seller in paperback and eBook editions. The New York Post Page Six article entitled “Tennis Queen Rips Stepmom” describes Linda’s book “as a jolting new memoir.” In it, she writes of growing up in a privileged San Francisco family and chronicles her struggle to understand its dynamics, stand up to her domineering father and make sense of her beloved mother’s sudden death and father’s (Prentis Cobb Hale) subsequent marriage to Denise Minnelli.Her third book THE LOVE OF ANGELS came out in 2016. A collection of stories, including the author’s own, the book chronicles encounters with angels, spiritual beings, animals and living people who show up to remind us of the power of love. Linda loves books and stories of all kinds and has always been interested in her own and others’ spiritual growth.For many years, she served as a trustee for San Francisco’s magnificent Grace Cathedral and for The Magic Theatre, whose mission was to discover and present new American playwrights, starting with Sam Shepard.Her family and friends, and especially her cherished friendship with Mary, are of primary importance to her, but she finds time to pursue other interests as well. For some years a nationally ranked tennis player, she became #1 in the U.S. in 60 mixed doubles in 2006 with her longtime partner and close friend Charlie Hoeveler. Holding six national titles, she continues to compete in tournaments across the country.Linda’s other passions include duplicate bridge, duck hunting, camping in Montana, fly-fishing on the North Fork of the Black Foot River, and at night, gazing up at the immense, star-studded, black