The Tao of Bill Murray 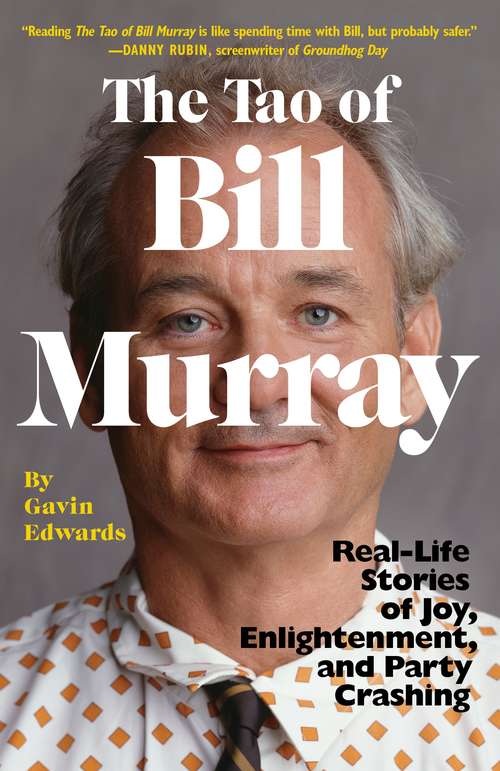 This collection of the most epic, hilarious, and strange Bill Murray stories, many of which have never before been reported, spotlights the star's extraordinary ability to infuse the everyday with surprise, absurdity, and wonder.No one will ever believe you.New York Times bestselling author Gavin Edwards, like the rest of us, has always been fascinated with Bill Murray--in particular the beloved actor's adventures off-screen, which rival his filmography for sheer entertainment value. Edwards traveled to the places where Murray has lived, worked, and partied, in search of the most outrageous and hilarious Bill Murray stories from the past four decades, many of which have never before been reported. Bill once paid a child five dollars to ride his bike into a swimming pool. The star convinced Harvard's JV women's basketball team to play with him in a private game of hoops. Many of these surreal encounters ended with Bill whispering, "No one will ever believe you" into a stranger's ear. But The Tao of Bill Murray is more than just a collection of wacky anecdotes. This volume puts the actor's public clowning into a larger context, as Edwards distills Murray's unique way of being into a set of guiding principles. A sideways mix of comedy and philosophy, full of photo bombs, late-night party crashes, and movie-set antics, this is the perfect book for anyone who calls themselves a Bill Murray fan--which is to say, everyone.Advance praise for The Tao of Bill Murray"If you are among the multitudes who have a Bill Murray story (viz: 'I was in the airport bar, and who sat down next to me but Bill Murray?'), The Tao of Bill Murray will speak to you."--Elle "Reading The Tao of Bill Murray is like spending time with Bill, but probably safer."--Danny Rubin, screenwriter of Groundhog Day"When confronted by life's challenges and opportunities, we should all be asking ourselves, 'What would Bill Murray do?' This book actually has the answers."--Jay Duplass, writer, director, actor, fan of Bill Murray "As much as I love Gavin Edwards's wonderful The Tao of Bill Murray, I can't help but feel sad that Bill Murray has never covered my eyes on a street corner."--Moby"[A] funny, affectionate portrait . . . Edwards skillfully weaves together many well-known and entirely new anecdotes from throughout Murray's career that capture him at the height of his power. Murray is an endless delight, and his knack for bons mots and non sequiturs will keep readers laughing before revealing an unexpectedly poignant vision for happiness. . . . A fun and revealing look behind the charm and mythos of Bill Murray that will only strengthen his legend."--Kirkus Reviews"Bill Murray seems to have shambled, stumbled, joked, surprised, party-crashed and acted his way to the Tao. However he got there, we're all better off for him having demonstrated his unique way."--Gary Dudney, author of The Tao of Running "Capturing the spirit of a man who actively defies logic is like chasing a mustang through the desert in your skivvies. Luckily Edwards had some help: In this rowdy little book, he collects potent tales from people who experienced something strange and intangible: the zany antics of a trickster whose improvisation skills on stage and screen are nothing compared to his sometimes gallant, sometimes ridiculous, always dauntless improvisations with life."--Linda Kohanov, author of The Tao of EquusFrom the Hardcover edition.