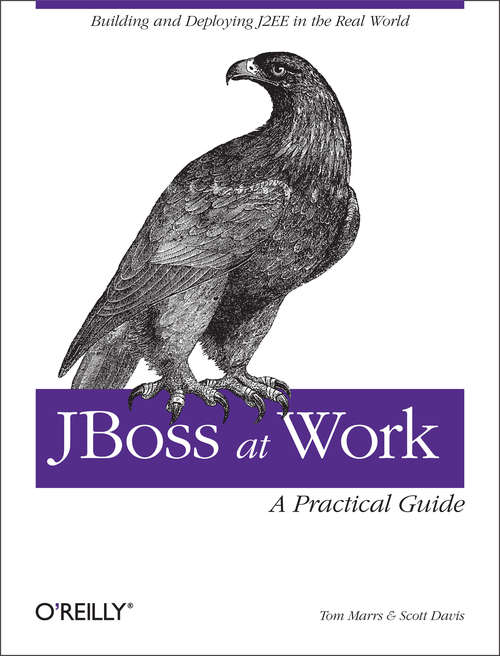 Consisting of a number of well-known open source products, JBoss is more a family of interrelated services than a single monolithic application. But, as with any tool that's as feature-rich as JBoss, there are number of pitfalls and complexities, too.

Most developers struggle with the same issues when deploying J2EE applications on JBoss: they have trouble getting the many J2EE and JBoss deployment descriptors to work together; they have difficulty finding out how to get started; their projects don't have a packaging and deployment strategy that grows with the application; or, they find the Class Loaders confusing and don't know how to use them, which can cause problems.

JBoss at Work: A Practical Guide helps developers overcome these challenges. As you work through the book, you'll build a project using extensive code examples. You'll delve into all the major facets of J2EE application deployment on JBoss, including JSPs, Servlets, EJBs, JMS, JNDI, web services, JavaMail, JDBC, and Hibernate. With the help of this book, you'll:

Implement a full J2EE application and deploy it on JBoss

Discover how to use the latest features of JBoss 4 and J2EE 1.4, including J2EE-compliant web services

Base your security strategy on JAAS

Written for Java developers who want to use JBoss on their projects, the book covers the gamut of deploying J2EE technologies on JBoss, providing a brief survey of each subject aimed at the working professional with limited time.

If you're one of the legions of developers who have decided to give JBoss a try, then JBoss at Work: A Practical Guide is your next logical purchase. It'll show you in plain language how to use the fastest growing open source tool in the industry today. If you've worked with JBoss before, this book will get you up to speed on JBoss 4, JBoss WS (web services), and Hibernate 3.