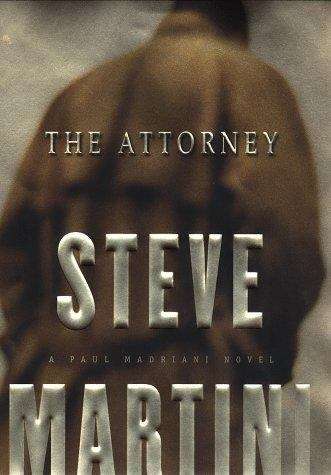 Sleuthing California defense counsel Paul Madriani lands one of his

million in a lottery but lost his heart. Jonah's got custody of his

eight-year-old grandkid Mandy, because his daughter Jessica is a

says no. So Jessica and Mandy disappear, with help from

rich males. Madriani tries to reason with Suade, who almost pulls a gun

on him, then taunts him with a press release: Suade's going public with

in Child Protective Services, so he gets a tidbit or two of inside

info--the charge is phony, but because CPS can't comment on cases, the

smear will suffice to ignite a media firestorm. When Suade turns up

dead, media interest does not subside. In court, circumstantial evidence

forms a tightening noose around Jonah's neck, and Madriani starts

wondering whether Jonah did kill Suade. Also, underworld types who may

Martini, who covered the Manson trial, then became a lawyer and a

suspense, media-circus scenes, and dramatizing the impact of office

politics on legal proceedings. His characters and prose are workmanlike

but sturdy. Always grouped with lawyers-turned-writers Scott Turow and

character and dialogue), and Grisham's a natural-born storyteller who

towers over all, but that he, Martini, is a better storyteller than

Turow and a better writer than Grisham. The Attorney is evidence that he