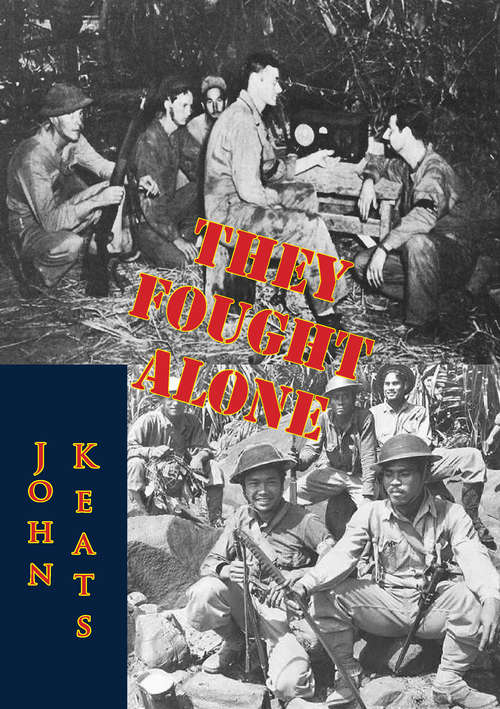 The time: 1942.The place: The Japanese-occupied island of Mindanao in the Philippines.The Story: A stirring true account of a man who refused to be defeated.When the American forces in the Philippines surrendered in May, 1942, a mining engineer named Wendell Fertig chose to take his chances in the jungle. What happened to him during nearly three years far behind enemy lines is the amazing story that John Keats tells in They Fought Alone.For Fertig, with the aid of a handful of Americans who also refused to surrender, led thousands of Filipinos in a seemingly hopeless war against the Japanese. They made bullets from curtain rods; telegraph wire from iron fence. They fought off sickness, despair and rebellion within their own forces. Their homemade communications were MacArthur's eyes and ears in the Philippines. When the Americans finally returned to Mindanao, they found Fertig virtually in control of one of the world's largest islands, commanding an army of 35,000 men, and at the head of a civil government with its own post office, law courts, currency, factories, and hospitals.John Keats, who also served in the Philippines, has captured all the pain, brutality, and courage of this incredible drama, in which many memorable men and women play their parts. But They Fought Alone is essentially the story of one man--a testament to the ingenuity and sheer guts of an authentic American hero."This remarkable story of guerrilla fighting in the Philippines during WWII...it is absorbing reading. . . . More remarkable still, though it contains death, torture, and desolation, it bubbles with humor." --S. L. A. Marshall, The NY Times Book Review"A true and admirably researched account of an American hero who refused to accept defeat. His courage was incredible and his resourcefulness equally so. . . . I have read scores of books in this genre and Keats' is one of the best." --Chicago Tribune