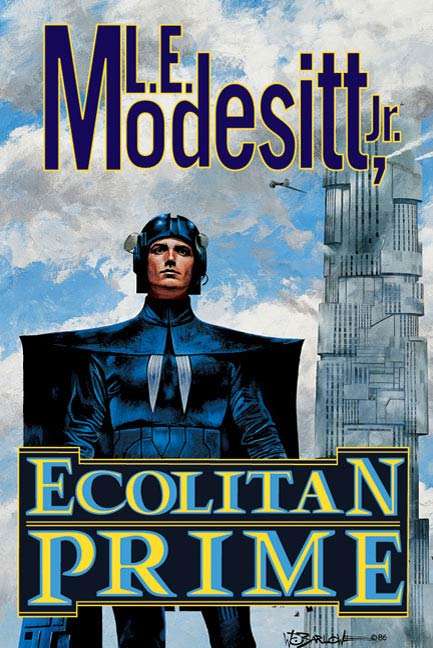 This new omnibus from L. E. Modesitt, Jr., includes the third and fourth of his four- volume Ecolitan series, The Ecologic Envoy and The Ecolitan Enigma, both starring Nathaniel Whaler.Four hundred years after winning secession from the Terran Empire (as chronicled in the earlier omnibus, Empire & Ecolitan), the star system Accord wants to sign a simple trade treaty with the Empire on microchip export tariffs. But if the agreement is so minor, why is Professor Nathaniel Whaler, chief economist at the Ecolitan Institute and his world's top commando killer, chosen as Accord's Envoy? Because the Imperial capital is a maddening bureaucracy of sniveling diplomats, high-profile figureheads, powers behind the throne, and spies---everywhere, spies. So the Envoy has to face red tape, politics, prejudice, as well as and a gauntlet of kidnappers, assassins, snipers, and bombs. And some ministry---but which?---doesn't want the treaty. In fact, some in the Empire still blame Accord for Earth's poisoning and for the defection of fifty star systems after the war between Imperial nuclear might and Ecolitan bio-ecological weaponry. A hidden cabal wants to fight that war again---even if, this time, the entire galaxy dies. And only Nathaniel Whaler, the Ecologic Envoy, has the power to stop the catastrophe. This omnibus concludes one of L. E. Modesitt's most powerful science fiction series.A shocking novel of what could happen if the fanatical defense of the environment crossed the line into deadly terror. When environmental consultant Jack McDarvid's boss is killed in a shootout near the Capitol, McDarvid becomes enmeshed in a diabolical plot behind the scenes of the environmental movement.Other Series by L.E. Modesitt, Jr.The Saga of RecluceThe Imager PortfolioThe Corean ChroniclesThe Spellsong CycleThe Ghost BooksThe Ecolitan MatterThe Forever HeroTimegod's WorldOther BooksThe Green ProgressionHammer of DarknessThe Parafaith WarAdiamanteGravity DreamsThe Octagonal RavenArchform: BeautyThe Ethos EffectFlashThe Eternity ArtifactThe Elysium CommissionViewpoints CriticalHazeEmpress of EternityThe One-Eyed ManSolar ExpressAt the Publisher's request, this title is being sold without Digital Rights Management Software (DRM) applied.