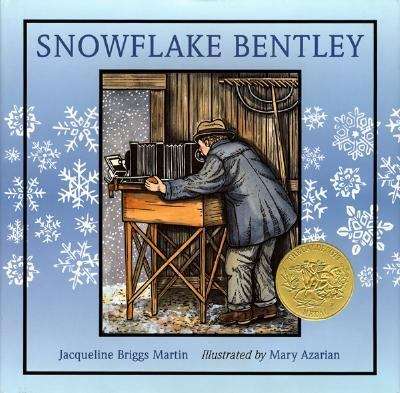 Snow in Vermont is as common as dirt. Why would anyone want to photograph it?

But from the time he was a small boy, Wilson Bentley thinks of the icy crystals as small miracles, and he determines that one day his camera will capture for others their extraordinary beauty.

Often misunderstood in his time, Wilson Bentley took pictures that even today reveal two important truths about snowflakes: first, that no two are alike, and second, that each one is startlingly beautiful.

His story, gracefully told by Jacqueline Briggs Martin and brought to life in Mary Azarian's lovely woodcuts, gives children insight into a soul who had not only a scientist's vision and perseverance, but a clear passion for the wonders of nature.