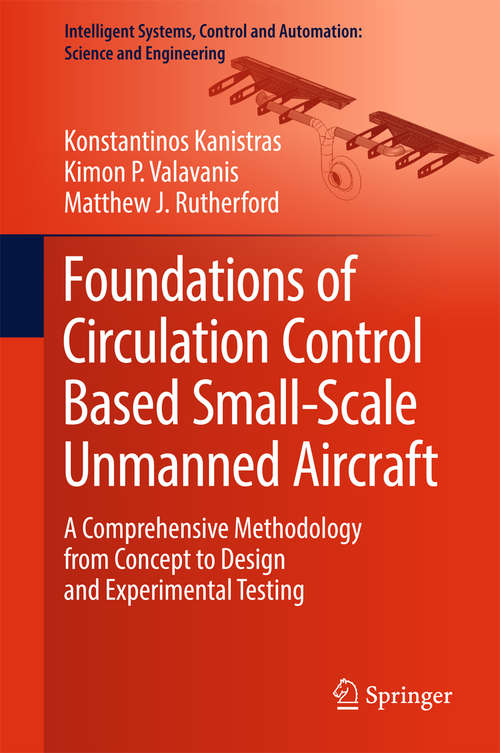 This book focuses on using and implementing Circulation Control (CC) - an active flow control method used to produce increased lift over the traditionally used systems, like flaps, slats, etc. - to design a new type of fixed-wing unmanned aircraft that are endowed with improved aerodynamic efficiency, enhanced endurance, increased useful payload (fuel capacity, battery cells, on-board sensors) during cruise flight, delayed stall, and reduced runway during takeoff and landing. It presents the foundations of a step-by-step comprehensive methodology from design to implementation and experimental testing of Coandǎ based Circulation Control Wings (CCWs) and CC system, both integral components of the new type of aircraft, called Unmanned Circulation Control Air Vehicle. The methodology is composed of seven coupled phases: theoretical and mathematical analysis, design, simulation, 3-D printing/prototyping, wind tunnel testing, wing implementation and integration, and flight testing. The theoretical analysis focuses on understanding the physics of the flow and on defining the design parameters of the geometry restrictions of the wing and the plenum. The design phase centers on: designs of Coandǎ surfaces based on wing geometry specifications; designing and modifying airfoils from well-known ones (NACA series, Clark-Y, etc. ); plenum designs for flow uniformity; dual radius flap designs to delay flow separation and reduce cruise drag. The simulation phase focuses on Computational Fluid Dynamics (CFD) analysis and simulations, and on calculating lift and drag coefficients of the designed CCWs in a simulation environment. 3-D printing and prototyping focuses on the actual construction of the CCWs. Wind tunnel testing centers on experimental studies in a laboratory environment. One step before flight testing is implementation of the qualified CCW and integration on the UAV platform, along with the CC system. Flight testing is the final phase, where design validation is performed. This book is the first of its kind, and it is suitable for students and researchers interested in the design and development of CCWs for small-scale aircraft. Background knowledge on fundamental Aerodynamics is required.