Fighting in the Shadows 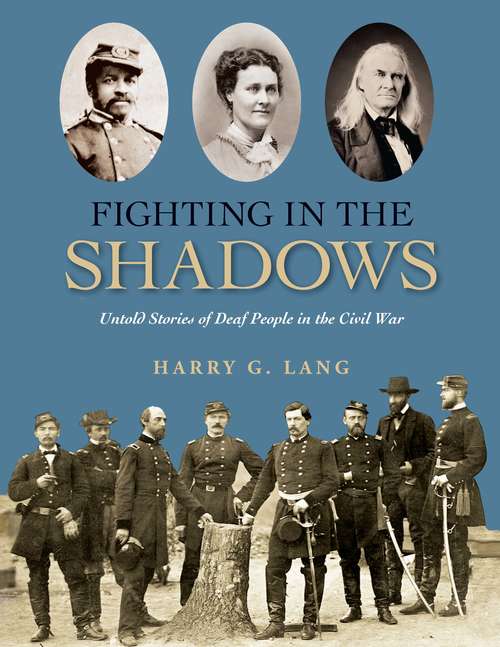 This visually rich volume presents Harry G. Lang’s groundbreaking study of deaf people’s experiences in the Civil War. Based on meticulous archival research, Fighting in the Shadows reveals the stories of both ordinary and extraordinary deaf soldiers and civilians who lived through this transformative period in American history. Lang documents the participation of deaf soldiers in the war, whose personal tests of fortitude and perseverance have not been previously explored. There were also many deaf people in noncombat roles whose stories have not yet been told—clerks and cooks, nurses and spies, tradespeople supporting the armies, farmers supplying food to soldiers, and landowners who assisted (or resisted) troops during battles. Deaf writers, diarists, and artists documented the war. Even deaf children contributed actively to the war efforts.

Lang pieces together hundreds of stories, accompanied by numerous historical images, to reveal a powerful new perspective on the Civil War. These soldiers and civilians were not “disabled” by their deafness. On the contrary, despite the marginalization and paternalism they experienced in society, they were able to apply their skills and knowledge to support the causes in which they ardently believed.

Fighting in the Shadows is a story of how deaf civilians and soldiers put aside personal concerns about deafness, in spite of the discrimination they faced daily, in order to pursue a cause larger than themselves. Yet their stories have remained in the shadows, leaving most Americans, hearing and deaf, largely unaware of the deaf people who made significant contributions to the events that changed the course of our nation’s history. This book provides new insights into Deaf history as well as into mainstream interpretations of the Civil War.