The Symposium of Plato 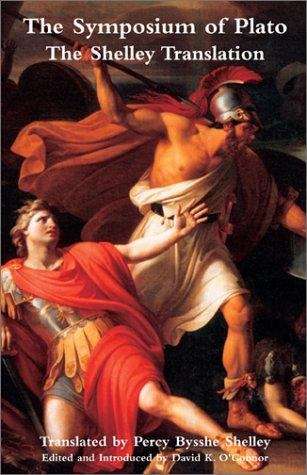 In the summer of 1818, Percy Bysshe Shelley pulled himself away from a flurry of other projects to devote himself to translating Plato's Symposium. Besides being one of the very great lyric poets of Romanticism, Shelley was an accomplished Hellenist, and had a natural sympathy for Plato's way of seeing the world. The result of his labor was a translation of Plato's principal work on love that is, in both clarity and felicity of expression, unmatched by any contemporary translation.

Much of what the dialogue offers to today's reader - namely, its invitation to see erotic experience as the privileged locus of our contact with the sacred and the divine - is lost in translation by failures of tone more than by inaccuracies or simple infelicities. The elevation and sophistication of Shelley's prose makes his translation a much better English vehicle for Plato's writing than the rather chatty and colloquial translations current today. Plato's speeches on love need an English idiom in which myth is at home, and in which humor rises to urbanity rather than descending to mere wit and joke. With Shelley, we get a translation of a great literary masterpiece by a writer who is himself a literary master, and his mastery is of exactly the type required by Plato's text.

This translation came at the height of Shelley's powers, mirroring in language and conception some of his finest works, and so is itself a precious document in the history of Romanticism, for which the reappropriation of Plato is second in importance only to the massive influence of Shakespeare. Mary Wollstonecraft Shelley, her husband's literary executor, upon publication of (a somewhat expurgated version of) the dialogue, boasted that "Shelley resembled Plato; both taking more delight in the abstract and the ideal than in the special and the tangible. This did not result from imitation; for it was not till Shelley resided in Italy that he made Plato his study. He then translated his Symposium and Ion; and the English language boasts of no more brilliant composition than Plato's Praise of Love translated by Shelley." If this goes too far, it goes at least in the right direction.