The Complete Daughters of the Promise Collection 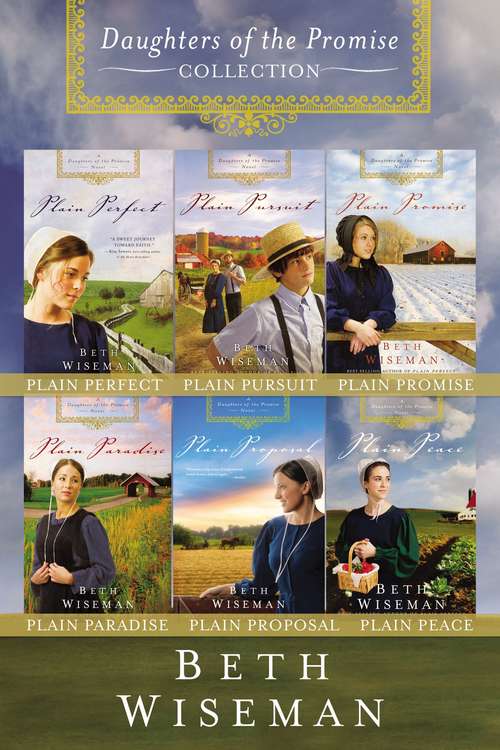 Miller is searching for her grandparents' house . . . and so much more. After

years of neglect and abuse, she's turning to a lifestyle of simplicity among

the Amish to find herself. As she discards the distractions of her former life,

she befriends the young boy working on her family's farm, and his attractive

for Samuel--and his for her--deepen. Will Lillian find her faith in Plain living,

or will she be forced to return to her former life?Plain PursuitCarley isn't there long when she meets Lillian's

stepson is stricken with a life-threatening disease, Noah is forbidden to

intervene, but he resolves to do whatever it takes to save the boy's life.

loyalty to Lillian. And to further complicate matters, everyone around her

for her past mistakes. When her hiatus is up, Carley must make a life-changing

decision: stay and face the path that is set before her, or flee and leave the

her guest cottage for a month, Sadie's world is turned upside-down. Kade has a

five-year old autistic son who is unexpectedly left in his permanent care.

this man suitable for anything more than friendship?Plain ParadiseJosephine Dronberger was a scared teenager when she left her

baby with an Old Order Amish couple. But seventeen years have passed

and Josie longs to reconnect with her daughter. Linda--as the couple named

the child--is promised to Stephen Ebersol, the bishop's grandson. They plan to

marry in the fall. When her birth mother comes to Paradise, Linda is drawn

to a world she's never known. Will the direction she's been heading

since birth suddenly derail, and who will stand by her convictions--mother or

and she is hopeful that Saul Fisher will propose to her soon. But when Saul

starts talking about leaving the only world either of them has ever known,

thing she knows for certain, she loves Saul and feels he's the one God has

chosen for her. But Saul's indecision has come at an inconvenient time as

Miriam is noticing advances from Jesse Dienner, a man she went to school with

and who wants to marry. Who will Miriam choose a life with--and who will

Under normal circumstances, Anna Byler would

have her choice of any of the young men in her Amish community. But because of

the strict rules enforced by her grandfather, the bishop, the available suitors

are afraid to court her. Then handsome Jacob Hostetler moves to Paradise and

decides Anna is worth the challenge. Anna sees that the bishop's legalism is

doesn't. When she is forced to deception in order to pursue her dream of

marriage and family with Jacob, Anna feels her own faith slipping. If only she

could get her grandmother to help her stand up to the bishop. But Mammi is

keeping secrets of her own. Anna wants to honor her grandparents, the two most

important people in her life, but her heart is divided.