The Birth of the Grand Old Party 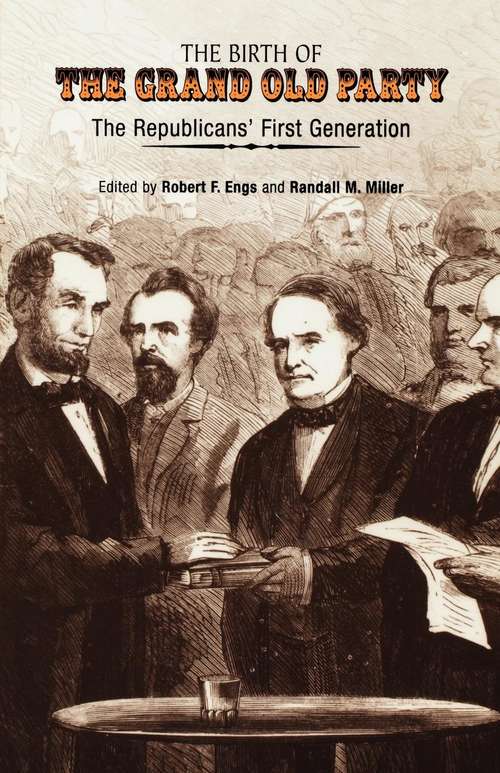 The period from 1850 to 1876 was the most transformative era in American history. During the course of this tumultuous quarter century Americans fought a bloody civil war, tried to settle the issue of state versus central government power, recognized the dominance of the new industrial economy over the older agricultural one, and ended slavery, long the shame of the nation. At the same time, a major political realignment occurred with the collapse of the "second American party system" and the emergence of a new party, the Republicans.But the defeat of slavery--the chief catalyst for the birth of the Republican party--was at best a limited success. The Constitution had been rewritten to abolish slavery and guarantee equal protection under the law, but social equality for African Americans and expanding freedom for others remained elusive throughout the nation. For these triumphs and enduring tragedy, the Republican party, which became in time and memory the party of Abraham Lincoln, bore primary responsibility.This collection of six original essays by some of America's most distinguished historians of the Civil War era examines the origins and evolution of the Republican party over the course of its first generation. The essays consider the party in terms of its identity, interests, ideology, images, and individuals, always with an eye to the ways the Republican party influenced midnineteenth-century concerns over national character, political power, race, and civil rights.The authors collectively extend their inquiries from the 1850s through the 1870s to understand the processes whereby the second American party system broke down, a new party and politics emerged, the Civil War came, and a new political and social order developed. They especially consider how ideas about freedom in the 1850s coalesced during war and Reconstruction to produce both an expanded call for political and civil rights for the ex-slaves and a concern over expanded federal involvement in the protection of those rights. By observing the transformation of a sectional party born in the 1850s into the "Grand Old Party" by the 1870s, the authors demonstrate that no modern political party, even the one that claims descent from Lincoln, has surpassed the accomplishments of the first generation of Republicans.Contributors--Jean H. Baker, Professor of History at Goucher College, Maryland, is author of Mary Todd Lincoln: A Biography.Eric Foner, DeWitt Clinton Professor of History at Columbia University, is author of Reconstruction: America's Unfinished Revolution, 1863-1877, winner of the Bancroft Prize.Michael F. Holt, Langbourne M. Williams Professor of American History at the University of Virginia, is author of The Rise and Fall of the American Whig Party: Jacksonian Politics and the Onset of the Civil War.James M. McPherson, Professor of History at Princeton University, is author of Battle Cry of Freedom: The Civil War Era, winner of the Pulitzer Prize in history.Mark E. Neely, Jr., McCabe-Greer Professor in the American Civil War Era at Pennsylvania State University, is author of The Fate of Liberty: Abraham Lincoln and Civil Liberties, winner of the Pulitzer Prize in history.Phillip Shaw Paludan, Naomi Lynn Professor of Lincoln Studies at the University of Illinois at Springfield, is author of The Presidency of Abraham Lincoln, winner of the Lincoln Prize.Brooks D. Simpson, Professor of History at Arizona State University, is author of Ulysses S. Grant: Triumph over Adversity, 1822-1865.Published in cooperation with The Library Company of Philadelphia.