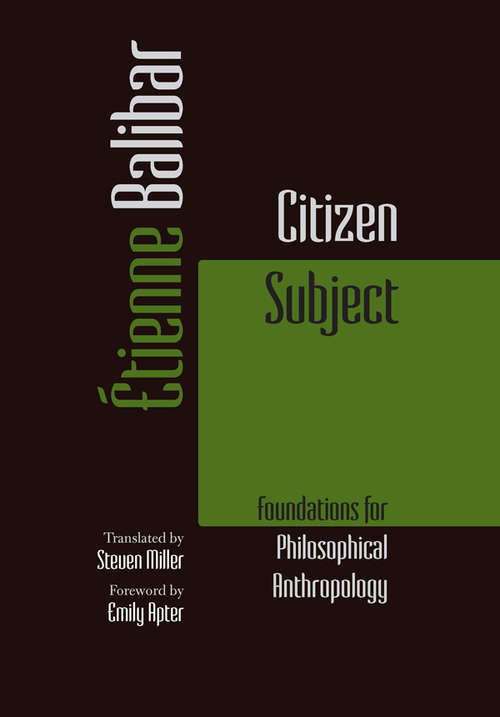 What can the universals of political philosophy offer to those who experience "the living paradox of an inegalitarian construction of egalitarian citizenship"? Citizen Subject is the summation of Étienne Balibar’s career-long project to think the necessary and necessarily antagonistic relation between the categories of citizen and subject. In this magnum opus, the question of modernity is framed anew with special attention to the self-enunciation of the subject (in Descartes, Locke, Rousseau, and Derrida), the constitution of the community as “we” (in Hegel, Marx, and Tolstoy), and the aporia of the judgment of self and others (in Foucualt, Freud, Kelsen, and Blanchot).

After the “humanist controversy” that preoccupied twentieth-century philosophy, Citizen Subject proposes foundations for philosophical anthropology today, in terms of two contrary movements: the becoming-citizen of the subject and the becoming-subject of the citizen. The citizen-subject who is constituted in the claim to a “right to have rights” (Arendt) cannot exist without an underside that contests and defies it. He—or she, because Balibar is concerned throughout this volume with questions of sexual difference—figures not only the social relation but also the discontent or the uneasiness at the heart of this relation. The human can be instituted only if it betrays itself by upholding “anthropological differences” that impose normality and identity as conditions of belonging to the community.

The violence of “civil” bourgeois universality, Balibar argues, is greater (and less legitimate, therefore less stable) than that of theological or cosmological universality. Right is thus founded on insubordination, and emancipation derives its force from otherness.

Ultimately, Citizen Subject offers a revolutionary rewriting of the dialectic of universality and differences in the bourgeois epoch, revealing in the relationship between the common and the universal a political gap at the heart of the universal itself.