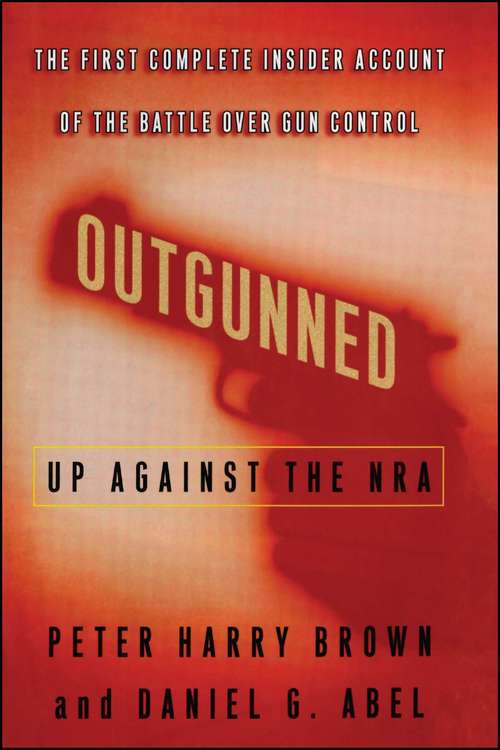 Ours is a nation in the grip of a strange kind of mania. Why after President Reagan was shot was there virtually no handgun legislation? Why after the Columbine massacre in Littleton, Colorado, was nothing done to regulate the tools that children most frequently use to kill one another? Why was there no legislative response after a six-year-old in Flint, Michigan, shot a classmate with a .32 caliber "pocket rocket"? Tragedy follows tragedy, with twelve children shot dead every day in America, but guns remain less regulated than automobiles. Why? As authors Peter Harry Brown and Daniel G. Abel in this powerful book demonstrate, it is because of the terrible power of the gun coalition. Outgunned begins with the story of Wendell Gauthier, the "master of disaster" attorney, who brought down the tobacco industry to the tune of billions and then turned his attention to guns. He struck fear into the hearts of the gun manufacturers as he set out to make gunmakers bear some liability for the killings caused by the often poorly made, inaccurate handguns they marketed to criminals. Coauthor Daniel G. Abel worked for Gauthier, along with other attorneys, as the gun-control campaign gathered momentum. This legal initiative seemed to be about to make history and change the face of violence in America, but sadly, Wendell Gauthier died of cancer before meaningful gun control could be established. More than thirty class-action suits against gun manufacturers now languish in courtroom paralysis while as many Saturday night specials as ever are being made. What happened? Brown and Abel demonstrate how the pro-gun forces once again curbed the will of a nation. This book shows the enomous power of the NRA -- how it killed pending legislation in Congress, hijacked the Campaign Act to fund the George W. Bush presidential election victory, and eviscerated the American Shooting Sports Council. That association and the gun manufacturers actually wanted to compromise and agree to new handgun laws, implicitly accepting some liability, but the NRA leadership, with Charlton Heston as their president, crushed them. In Outgunned, Brown and Abel uncover how NRA lobbyists were instrumental in stopping Smith & Wesson in its tracks. They show how the tendrils of the NRA reach into the Christian Alliance and Republican Party, and how men like John McCain have fought back and been undermined. Outgunned reveals how the NRA began dealing with President George W. Bush when he was still governor of Texas -- prodding him into signing a shocking prohibition against the kind of suits Gauthier brought against the gun manufacturers. Outgunned is the story of a legal crusade with up-close accounts of the people who fought every step of the way. For those who believe in the importance of stopping unnecessary bloodshed, this book is essential, powerful, and urgent.